The SportsLiteSports at just one click!
HomeCricketT20 World Cup: List of all Winners; Which Country has most Titles
Cricket

T20 World Cup: List of all Winners; Which Country has most Titles 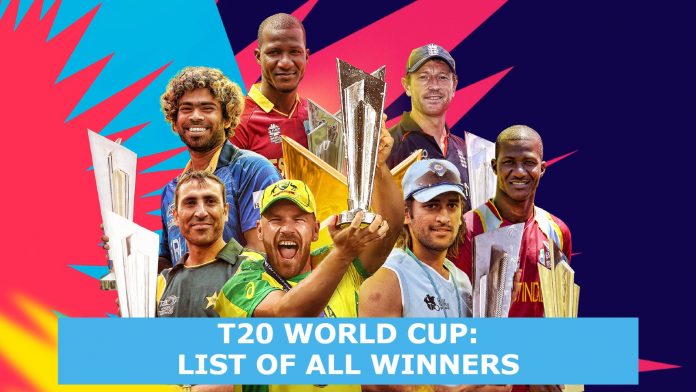 The eighth edition of the highly anticipated tournament will kick off on October 16, with the inaugural match to be contested between Sri Lanka and Namibia. Administrated by the International Cricket Council (ICC), T20 World Cup generally occurs every two years. The tournament comprises three total rounds, namely, Preliminary Round i.e. The Group Stage, then Super 12s, and lastly the Play-offs. 16 cricketing nations are set to take part in the marquee tournament. The previous edition’s winners Australia will host the multinational tournament from October 16 to November 13.

On that note, this article presents you with the list of all title winners of the T20 World Cup.

India won the inaugural T20 World Cup in 2007 by defeating arch-rival Pakistan by five runs. The final was played between the two countries at the Wanderers Stadium, Johannesburg, South Africa. Under MS Dhoni’s leadership, India won the match walking on a tightrope. Batting first the Men in Blue managed to put up a target of 157, which at a point felt short. However, the Indian contingent kept its calm and restricted the Men in Green to 152. Hence, created history by becoming the first to win the T20 World Cup title.

After finishing as runners-up in the first edition, Pakistan won their maiden T20 World Cup title in 2009. In the tournament hosted by England, the Men in Green defeated Sri Lanka by 8 wickets. After losing their first match against the hosts and another against Sri Lanka, Pakistan managed to win the trophy.

Hosted by the West Indies, the 2010 ICC World Cup T20 was the third edition and was held between 30 April and 16 May 2010. England became the champions in the edition by defeating Australia in the final. It was England’s first and only T20 World Cup title. Moreover, English player Kevin Pieterson was named the player of the tournament.

This was the first World Twenty20 tournament held in an Asian country. Hosted by Sri Lanka, the tournament took place between 18 September to 7 October. The final was played between the hosts and West Indies. West Indies claimed their maiden T20 World Cup trophy in this edition. West Indies posted a brief target of just 137 runs. However, a phenomenal bowling effort helped the Windies restrict the hosts for 101 runs. Winning the title by 36 runs in a low scoring match. Furthermore, West Indies’ Marlon Samuels was named the Player of the Match.

Sri Lanka beat India to become the title champions in the 2014 edition. The 2014 World Twenty20 tournament was hosted by another Asian country Bangladesh and it took place from 16 March to 6 April. The Lankan Lions won the tournament by beating India by 6 wickets in the final played at Mirpur. While Kumar Sangakara received the Player of the Match trophy, India’s star batter claimed the Player of the Series award.

The sixth edition ICC T20 World Cup took place in 2016, hosted by the previous year’s runner-ups India. West Indies claimed their second title and became the only nation to have won the trophy more than once. The Windies defeated England by 4 wickets in the final played at Eden Gardens, Kolkata. Once again Marlon Samuels grabbed the Player of the Match award.

Australia became the title champions for the first time by defeating New Zealand in the final played at Dubai International Cricket Stadium, Dubai. Australia won by 8 wickets and Mitchell Marsh became the Player of the Match considering his all-round performance.

Which Country has the most T20 World Cup Titles

West Indies is the only team to have won the title twice in 2012 and 2016. Hence, the Windies have won the T20 World Cup the most.