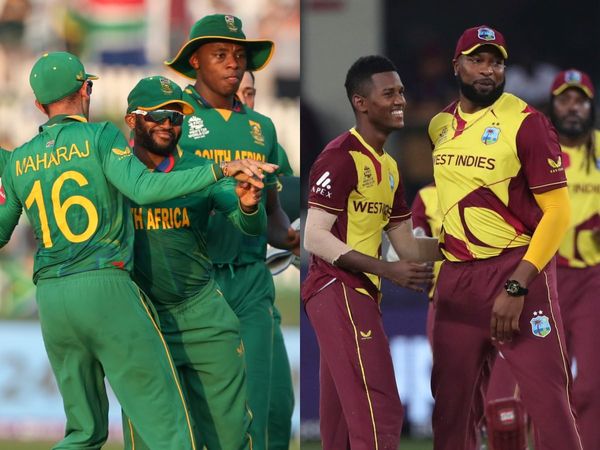 Today we have clash between South Africa and West Indies. Do you remember the year 2007 when the first edition of T20 World Cup was played? It was these two teams only in the first match of the 2007 World Cup. We will also discuss who won Man of the Match award in South Africa vs West Indies match.

After winning the toss, South Africa captain Temba Bavuma decided to bowl first. He made a shocking announcement that Quinton De Kock is out due to some personal reasons. South African bowlers bowled really well and didn’t let West Indian batters to score ruins freely. Lendl Simmons had a really bad day. Whatever shot he played, he found the fielder there. He scored 16 runs of 35 balls. Yes 35 balls, with less than a strike rate of 50. Shocking!! Evin Lewis scored a fifty of 35 balls, but this was negated by Lendl Simmons. West Indies posted a below par total of 143 runs on board.

Who won Man of the Match award in South Africa vs West Indies Match?

Anrich Nortje for his brilliant spell was adjudged as the Man of the Match in South Africa vs West Indies. Though he only gets only one wicket, but he was way too economical as he gave only 14 runs in his 4 overs. He was bowling very well in IPL and he carried the momentum here also. Also, he bowled very well to restrict West Indies to only 143 runs. He was just outstanding.

South African bowlers outplayed West Indian batters. It is no very difficult task for west Indies to qualify for the next stage with two consecutive losses and a bad NRR.