The SportsLiteSports at just one click!
HomeCricketICC T20 World Cup 2021: Afghanistan vs Scotland- Man of the Match...
Cricket 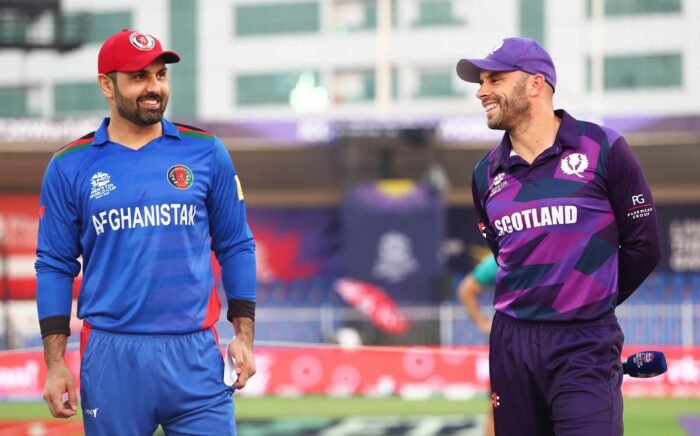 We are back at Sharjah again. Its Afghanistan vs Scotland. Scotland have come here with high on confidence after winning all the games in their group stage. On the other hand, Afghanistan have defeated West Indies in their warm up game and these grounds felt like home grounds to them. Afghanistan, obviously was the better side between the two but it all depends who play better during the match. We will discuss who won Man of the Match award between Afghanistan vs Scotland match?

After winning toss, Afghanistan captain, Mohammad Nabi, chose to bat first. Afghanistan batters put on a batting masterclass. They were just amazing. Their openers, Mohammad Shahzad and Hazratullah Zazai, gave them a perfect start. After the end of powerplay, they scored 55 runs with the loss of only 1 wicket. The stage was full set and middle order can easily bat freely and they followed the same. All the players hit the bowlers out of the ground being Najibullah being the highest scorer of 59 runs of just 34 balls. With everyone’s effort, Afghanistan post 190 on the board.

After coming in, Scotland did get a good start as they scored 27 runs in just 3 overs. But then came Mujeeb Ur Rehman. He took 3 wickets in the same over and Scotland’s top order had no answer to his variations. Interestingly, 5 batsmen of Scotland got out on Zero. After some clinical performance with the ball by Mujeeb, Rashid Khan also joined the party. At the end, Mujeeb Ur Rehman took five wickets and Rashid Khan four. Afghanistani bowlers totally bamboozled the Scotland’s batsmen in such a way that Scotland got all out on 60 runs.

Who won Man of the Match award between AFG vs SCO match?

Mujeeb Ur Rehman, for his brilliant fifer, was adjudged as the Man of the Match for this match. He bowled brilliantly and used his variations perfectly. And, as earlier stated, Afghanistan have experience of playing on these kinds of grounds as these conditions are similar to their home conditions. And their spinners exploited the conditions brilliantly. Mujeeb took 5 wickets and gave only 20 runs in his over spell and break the backbone of Scotland players.

Afghanistan also scored their highest ever score at the T20 World Cup and they also get their biggest win by runs in a T20I innings. Afghanistan will surely be an Underdog for this World Cup. They have got the best Spin attack in the world and also some brilliant power hitters.