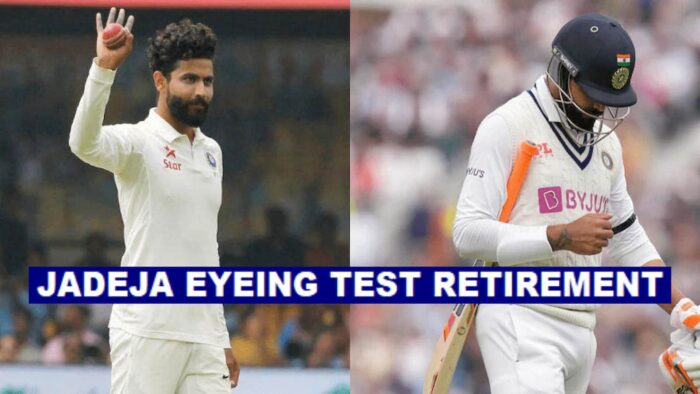 Team India’s star player Ravindra Jadeja is currently one of the best all-rounders in the world. Jadeja can turn the match with the ball, bat as well as fielding. This player is known for turning matches for India in all three formats. But now these reports are coming out that Jadeja is planning to retire from a format of cricket. Ravindra Jadeja might take retirement from Test Cricket to prolong his white ball career. To begin with, there is nothing official as of now but these are all reports that are coming from Dainik Jagran. It might be true. Let’s start with the report.

If reports are true, that in what can only be called a shocking development, India’s ace all-rounder Ravindra Jadeja is thinking of quitting the Test format in order to prolong his limited-overs career for the Indian team. Notably, Jadeja had suffered a forearm injury during the home series against New Zealand last month and had to sit out the final Test. The same issue has also resulted in him missing the Test series in South Africa and while the fans are expecting him to make a comeback soon, the all-rounder may not feature in Test matches anymore. Jadeja’s injury is very serious at this time. He is going to stay away from cricket for may months now.

In the last few years, the 33-year-old Ravindra Jadeja has developed into a brilliant and reliable batter and he was always a great left-arm spinner. The southpaw has been a keystone of the Test team in recent years and his numbers are also astounding. Jadeja is also considered to be one of the greatest fielders in the world today. Jadeja has even ousted Ravichandran Ashwin to become the preferred spinner in overseas conditions. He recently played all four Tests against England while Ashwin warming the bench.

The way Ravindra Jadeja has improved himself in the past 2 years is outstanding. He is a gun fielder in the outfield. Jadeja is one of the best fielders of the Indian Cricket team. Apart from being a good left arm spinner, now he is showing his class as a batsman. He provide handy runs in the middle order. Notably, he’s the fastest left-arm bowler to complete 200 wickets in Test cricket. But now reports are coming that Ravindra Jadeja might take retirement from Test Cricket to prolong his white ball career.

Meanwhile, India are scheduled to play three Tests in South Africa, starting from December 26 with the Boxing Day taking place at Centurion. Besides Jadeja, the likes of Rohit Sharma, Shubman Gill and Axar Patel will also give the Test series a miss due to fitness issues. Hence, it would be interesting to see how the visiting team’s playing XI would look like. With Axar and Jadeja being unavailable, Ashwin is likely to get a nod as the first-choice spinner.