5 Most Overrated Indian Cricketers at Present 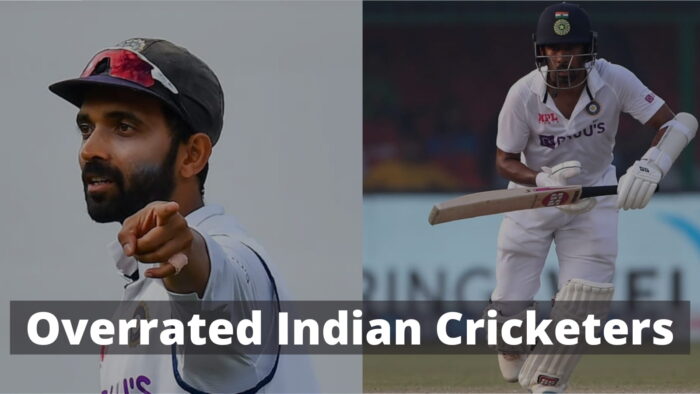 Performances and potential are two completely different things and they must be assessed and addressed in a right manner. If a player plays for India, there is no doubt that he lacks the skillset, but getting too many chances without translating the potential into performances can be demoralizing for others. Sometimes the selectors end up trusting a few players way too many times despite consistent failures, which doesn’t go well with the fans at all. This special article talks about the 5 most overrated Indian Cricketers at present, who promised a lot, are getting enough chances to prove but didn’t live up to the expectations.

In countries like India, where cricket is no less than a religion, and the fans are demanding, the trolls can disrupt a player’s mental state. In the past as well as in the current scenario, there are a few players who fall into the over-rated category.

Once considered the replacement of MS Dhoni, Wriddhiman Saha is now the second choice keeper in the Indian Test team. Saha was given ample opportunities to prove his worth. He was selected in the Indian team over the likes of Parthiv Patel and Naman Ojha, who also performed well in the domestic circuit. Saha’s wicketkeeping and his experience is what finds him a place in the squad regularly but if fails to perform consistently, he might have to lose his place to Srikar Bharat. Notably, Bharat is also having a good run with bat and gloves in the domestic cricket.

35-year-old Saha is already suffering from fitness issues. He hasn’t played any rememberable innings in recent times. Widdhi’s First Class average is 42.0 which takes a major dip when it comes to Test Cricket, where it is under 30. In his last 12 innings, he has a solitary crossing of the fifty-run mark.

Form is temporary but class is permanent. In light of this, the Indian selectors have given bountiful shots to Bhuvneshwar Kumar to fire and rightfully so. Bhuvneshwar Kumar’s inclusion in the list of 5 most overrated Indian cricketers at present is certainly disheartening. It can better be rephrased as out-of-form cricketer. The 31-year-old’s prowess as a quality seamer was never in doubt. It is only the fitness concerns which have posed a few roadblocks along the way. His injuries date back to 2018 when a back injury forced him to miss the Test series in England. Then he suffered a hamstring problem during the 2019 ICC ODI World Cup, before a thigh injury caused Bhuvneshwar to sit out of a large part of IPL 2020 and the entire Australian tour.

However, Bhuvneshwar’s number speak volumes about his potential, the fact that he had an below par outing in IPL 2021 and T20 World Cup 2021 cannot be ignored. If Bhuvi doesn’t cut the mustard soon, he might become one the many stars of Indian cricket who faded before they could really shine.

The senior of the Pandya Brothers, Krunal Pandya has failed to perform consistently. Having made his international debut in 2018 for India, Krunal has 19 T20 internationals. He has scored 124 runs in 10 innings at a subpar average of 24.80. Also he has 15 scalps to his name at an average of 36.93, which does not speak volumes of his potential. Moreover, he has not scored an IPL half century since 2016 and averages less that 20 for three consecutive IPL seasons. Krunal definitely doesn’t justify his auction price of 8.80 Cr. His bowling average in the last two seasons, 2020 and 2021, reads 63.33 and 53 respectively. Having such analysis in IPL doesn’t guarantee him a place in the national side. However, he is currently sidelined form the national team’s plans.

Ajinkya Rahane, the former Vice-Captain of the Indian Test Team, has come under fire in recent times due to his lack of form at the international level. Ever since the century he scored against Kangaroos in 2020 in Melbourne, the right-handed batter has looked out of sorts. In the last 22 innings he has batted in, he managed only two fifty plus scores, which doesn’t justify his caliber. It is the experience that Rahane boasts of, that is keeping his place in the team secure.

Also Read: 5 Indian players whose career might come to an end in Rahul Dravid era.

Once, with an average of more than 50, he was the first name on the sheet for overseas Tests. He now averages less than 25 in his last 27 Test innings. The downfall of Rahane is disheartening to fans and also inimical to the Indian Test Team. Had he not been this much experienced, he would have lost his place to one of the many contenders.

Yet another tough inclusion in the list of most overrated Indian Cricketers. Hardik Pandya, who rose through ranks in the IPL hot his reward in the form of selection in the Indian Team in 2016. Early in his career, he showed the glimpses of a dependable player. However, with injuries being his consistent foes, his game was affected adversely. In Tests, ODIs and T20Is combined, Hardik has managed to score at an average of just over 25 in 13 innings this year. Overall, in ODIs, his batting average is 29.9 which is mostly due to his performance in India and sub continents.

The 28-year-old can smash spinners all over the park but is not that effective against the quickies. He struggled with bat in South Africa averaging a mere 8.66 with highest score of 14 in 6 ODIs. He has not bowled regularly since 2020. Hardik averages more than 50 with the bowl with just 6 wickets to his name in the year 2021. Hardik has got enough opportunities and is still in plans for the white ball cricket. As fans and supporters of Indian cricket, everyone wants Hardik to fire again before its too late.

In a nutshell, as mentioned before, a player playing for India doesn’t lack the skillset. It is just a matter of time and (sometimes) luck that one gets more chances to prove his worth than others. All the players mentioned above have proved their prowess in the past. They are going through the rough phases in their respective careers. However, selectors’ persistence with such players make them seem overrated. They, for a better, should be dropped and if they perform well in the domestic circuit, should be recalled without hesitation.