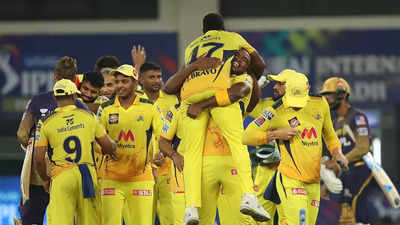 A match that saw the highest of highs and the lowest of lows, the final of the Vivo IPL 2021 gave a fitting end to a memorable tournament. Unlike the rest of the playoff matches, the final witnessed a high-scoring game with boundaries galore. After the dust had settled, the deserving team emerged victorious and took back their rightful crown. Millions of fans celebrated with joy as the 14th edition of the Indian Premier League bid us goodbye, leaving behind a plethora of memories to be cherished. That being said, here is a detailed review of the match in – CSK vs KKR IPL 2021 Final Match Report.

Asked to bat first, CSK openers Ruturaj Gaikwad and Faf du Plessis gave the men in yellow a positive start. The openers batted with great intent and spark in the powerplay, posting an impressive 50 runs. The duo showed no signs of backing down as they added 61 runs for the first wicket before Gaikwad was dismissed for 32 by Narine. However, this didn’t derail CSK’s momentum as Robin Uthappa and Faf kept the scoreboard ticking. With Uthappa being the aggressor, the pair forged yet another 50-run partnership in no time. One could sense the momentum changing as CSK’s grip tightened the match.

Uthappa’s short-but-sweet cameo (31 off 15) was ended courtesy of Sunil Narine but he had done his job to perfection. Despite losing a well-set batsman, Chennai showed no signs of slowing down as Moeen Ali joined the party. Mo chipped in some handy runs (37*) as CSK scored an impressive 54 runs in their last 4 overs. Making a mockery of the opposition’s attack, CSK powered their way to a massive total of 192-3. Faf du Plessis’s masterclass with the bat (86) ended on the last ball of the innings by Shivam Mavi. The Chennai batters set the stage but little did we know that we were in for a rollercoaster of emotions.

KKR’s innings was a game of two halves. Venkatesh Iyer was dropped on 0 by MS Dhoni in the very first over. The Southpaw made sure that Chennai paid a heavy toll for their costly mistake. Iyer and Gill gave Kolkata the ideal start with the former hitting boundaries left, right, and center. KKR were well and truly ahead of their opponents for a major portion of their innings as Iyer relentlessly pounded the Chennai bowlers. CSK finally got a breakthrough courtesy of Lord Shardul Thakur as he dismissed the dangerous Iyer for 50 in the 11th over. Thakur also removed Nitish Rana for a golden-duck as he continued his tradition of taking 2 wickets in an over. Well, that was about it for the Knight Riders as the domino effect had begun.

Owing to some mesmerizing bowling from the Chennai lads, KKR went from cruising at 91/0 in 10.3 overs to struggling at 125/8 in 16.3 overs. Narine (2), Karthik (9), Morgan (4), and Tripathi (2) failed to make a significant contribution for their side as Kolkata was on its knees. Thakur, Jadeja, and Hazlewood completely ran through the KKR middle order as they were inches away from the cusp of greatness. Since throwing the towel in was not an option, tail-enders Lockie Ferguson (18) and Shivam Mavi (20) began throwing haymakers at the opposition. Despite being an inspired fight back, the retaliation was too little and too late. KKR could only manage to score 165/9 runs in their 20 overs as CSK won the match by 27 runs.

After a sensational outing with the bat and ball, CSK reclaimed the IPL title for the 4th time in the franchise’s history. The Dhoni-led side has had quite a memorable 12 months, to say the least. From being the first side to be knocked out from the race to the playoffs in 2020, CSK became the first team to qualify for the playoffs in 2021, CSK never fails to inspire. After what was a complete team effort, CSK deservedly won the title after 3 long years. The future may look uncertain for the men-in-yellow but you can’t deny the fact that they were hands-down the best side throughout the tournament.

Ladies and Gentlemen, I present to you, the winners of the VIVO IPL 2021,