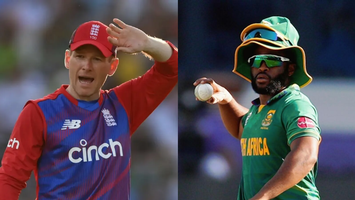 The Bavuma-led South Africa would be walking into Sharjah with their backs against the wall to face off against their strongest competition yet. Both sides are motivated than ever as they gear up for an unmissable battle of pride and survival. The stakes couldn’t be higher as the fate of the entire group hangs in the balance. The following article provides an in-depth preview of the England vs South Africa T20 World Cup match.

The two T20 behemoths have locked horns on 20 prior occasions with their last encounter happening in December 2020. England has a slight edge over their Protean rivals with an 11-9 win-loss record. However, South Africa has the edge over England when it comes to their matches in the T20 World Cup. Both the sides have faced each for a record five times in the tournament with South Africa having 3 wins to their name. England has the perfect opportunity to equalize the head-to-head record and send SA home packing.

England has had a flawless run in the T20 World Cup this year with 4 wins out of 4 matches. They have vastly dominated their competition and produced the goods in all aspects of the game. With an undisputed Net Run Rate of +3.183, England’s chances of ending the group stage as table toppers are almost a guarantee. On the other hand, South Africa started their campaign with a heart-breaking final over defeat to Australia. They were able to turn the tide with a dominating victory against West Indies and a final over-thriller against South Africa. A dominating victory under 14 overs against Bangladesh put everyone on notice that the Proteas weren’t messing around. Tied with Australia at 6 points, South Africa would be eyeing a dominating performance against Australia to seal a spot in the final four.

Speaking about the players to be on the lookout for, you simply can’t look beyond England’s Jos Buttler. Buttler has been going through a purple patch in the tournament as of now. He also became the only person to register a triple-digit score in his previous outing with the willow against Sri Lanka. On the other hand, opener Quinton de Kock would love to get amongst the runs after a dismal start to the tournament. QDK has made the headlines for all the wrong reasons and a solid outing with the bat will do the Southpaw and South Africa a world of good. Seamer Kagiso Rabada announced his arrival in form with a solid performance (3/20) against Bangladesh. Being one of the best bowlers in the world at the moment, expectations from Rabada would be at a record high.

Losing is unlikely to stop England from finishing at the top of the Group 1 standings. Winning may not be enough to earn South Africa a place in the semi-finals. The contrasts between these teams, who clash in the last of their T20 World Cup group games in Sharjah on Saturday, don’t end there. Who’s going to come out on top? Our guess is as good as yours. One thing’s for sure that we are in for an absolute barn-burner of a contest.