AB De Villiers announced retirement from all forms of cricket 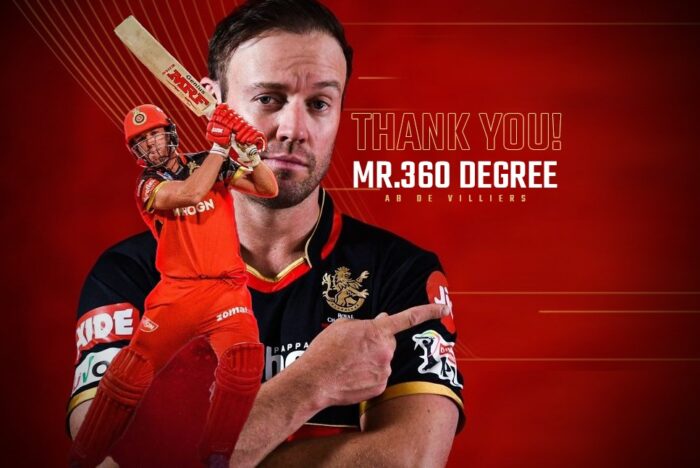 One of contemporary cricket’s greatest batters, South African legend AB de Villiers announced retirement from all forms of the game, which he dominated for 17 years with his 360-degree batting. The 37-year-old made the announcement on Twitter, ending a 17-year career, which saw him play in 114 Tests, 228 ODIs and 78 T20Is for the Proteas.

In a statement released, De Villiers said: “It has been an incredible journey, but I have decided to retire from all cricket.

Speaking about this decision, AB de Villiers said, “I have had a long and fruitful time playing for RCB. Eleven years have just whizzed by and leaving the boys is extremely bittersweet. Of course, arriving at this decision took a lot of time, but after a lot of contemplation, I’ve decided to hang up my boots and spend quality time with my family. I would like to thank the RCB management, my friend Virat Kohli, teammates, coaches, support staff, fans, and the entire RCB family for showing faith and supporting me all through these years.”

Since starting his association with RCB in 2011, he has enjoyed 11 fruitful seasons with the franchise and was its batting mainstay alongside Virat Kohli.

De Villiers has played 156 matches for RCB and scored 4,491 runs. He is the second all-time leading run scorer behind Kohli and holds the second and third-highest individual run total in RCB history with 133 not out against Mumbai Indians (in 2015) and 129 not out against Gujarat Lions (in 2016).

RCB chairman Prathmesh Mishra said, “AB de Villiers has been among the best ambassadors of the game, and we are honoured to have him represent RCB in the IPL. His work ethics have been impeccable, which has not only rubbed off on the team, but has left a high benchmark for other youngsters to follow.

“AB has been a true leader, both on and off the field and we would like to express our heartfelt gratitude for his tireless commitment in helping RCB establish itself as one of the premier franchises in the IPL.

“We wish AB all the best for his next innings in life. He will always be part of the RCB family.”

It is the end of the era with his retirement. He is a beast and greatest of all time in the history of IPL. He was a bit under-utilized in T20 Internationals, playing just 78 matches. But seeing his 360 degree shots was so pleasing to the eyes. And with AB De Villiers announced retirement, his time with RCB is also over and we can’t see him again as a batsman.