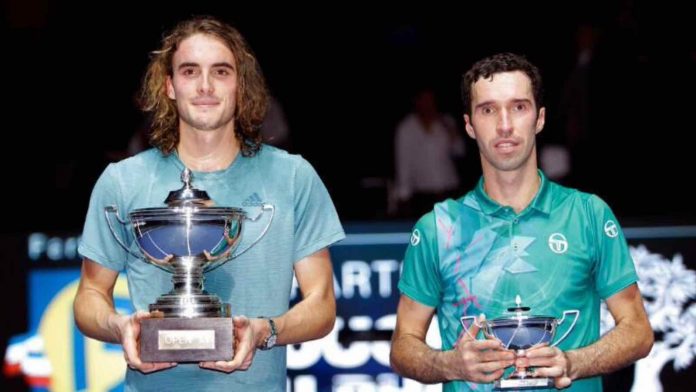 Third seed Stefanos Tsitsipas will face local wildcard Mikhail Kukushin in the first round of the Astana Open on Tuesday.

This season, Tsitsipas has put on some incredible performances, most notably winning the Monte-Carlo Masters for the second consecutive year. He won the Mallorca Championships as well, defeating Robert Bautista Agut in the championship match. The Greek also advanced to the championship rounds in two Masters 1000 competitions, falling to Novak Djokovic and Borna Coric, respectively, in Rome and Cincinnati. Tsitsipas most recently took part in the Laver Cup and played two singles matches. He defeated Diego Schwartzman 6-2, 6-1 before falling to Frances Tiafoe 1-6, 7-6(11) [10-8].

This season, Kukushkin has spent the most of his time competing on the ATP Challenger Tour and in the ATP event qualifying rounds. At the Miami Open, he defeated Botic van de Zandschulp in the main draw. In the most recent Davis Cup Finals, he played for Kazakhstan and dropped both of his singles matches to Tallon Griekspoor and Tommy Paul.

In their head-to-head matchup, Tsitsipas is up 3-0 over Kukushkin.

Tsitsipas can get a couple free points with to his powerful and precise serve. Kukushkin will find it challenging to handle his strong groundstrokes, particularly his one-handed backhand. By extending rallies and hoping the Greek is having a bad day, Kukushkin, who enjoys playing from the baseline, will have the best chance of winning. Tsitsipas ought to be able to defeat Kukushkin without too much difficulty, barring a breakdown.