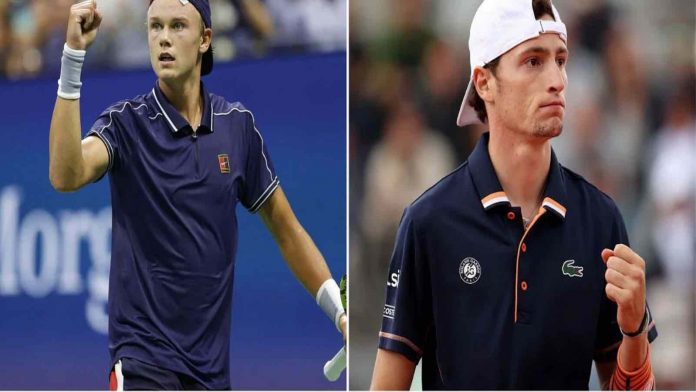 In the second round of the 2022 Swiss Indoors on Thursday, qualifier Ugo Humbert will square off against world No. 25 Holger Rune.

On his way to capturing the Stockholm Open championship last week, Rune faced Alex de Minaur in the first round. The young man got off to a fast start, breaking twice the opponent’s serve to take a 4-0 lead in the first set. The young Dane quickly won the set, and the Australian was unable to make up lost time. For the majority of the second set, the two players were evenly matched. In order to win the set 6-5, Rune made the crucial break in the eleventh game. In the subsequent game, he finished things off to win the match 6-2, 7-5. He had already won six straight matches.

In order to qualify for Basel’s main draw, Ugo Humbert earned victories over Aslan Karatsev and Bernabe Zapata Miralles. In the opening round, he fought World No. 50 Jenson Brooksby. In the opening set, Humbert quickly jumped out to a 5-0 lead and went on to easily win the match by serving it out. In the fourth game of the second set, Brooksby had a few break points, but he didn’t take advantage of them. It turned out to be expensive as the Frenchman broke his serve to take the lead 3-2 in the following game. In order to win 6-1, 6-4, Humbert was able to maintain the advantage all the way to the finish line.

Humbert is down 1-0 to Rune in their matchup. At the Indian Wells Masters in 2022, he defeated them in a 3-0 fashion.

During their respective triumphs in the first round, neither player faltered on serve. Rune will need to be on the lookout for Humbert’s effective use of his left-handed serve. However, the adolescent has recently been playing with excellent grace and assurance. He hasn’t really made any big blunders, and when he has, he has been able to recover very fast. Given his current performance, Rune is likely to extend his winning run.