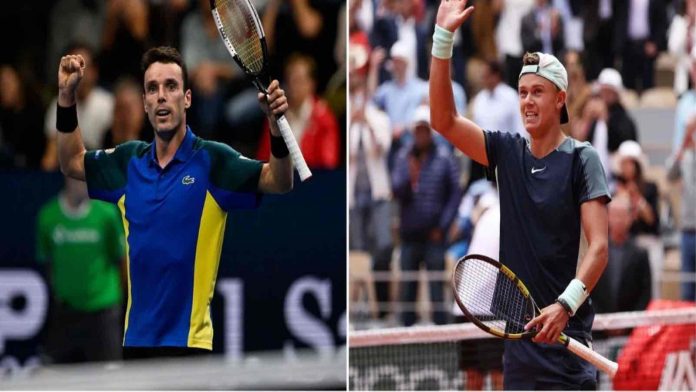 On Saturday, the semifinals of the 2022 Swiss Indoors will feature Holger Rune, the 25th-ranked player in the world, taking on Roberto Bautista Agut, the sixth seed.

Bautista Agut faced Stan Wawrinka following straight-set victories over Laslo Djere and Andy Murray. The remaining four break point opportunities Bautista Agut had to increase his lead were all wasted. Then, Wawrinka succeeded in breaking his rival’s serve to tie the match. After that, the two maintained their serve consistency for a few games. In the last moments, Bautista Agut took control and won the final three games in a row to win the first set. In the second set, both players had a several break point opportunities, but none of them were successful. Bautista Agut eventually won the tie-break to take the final set and the match 7-5, 7-6. (5).

Rune advanced to the quarterfinals, where he faced Arthur Rinderknech, after defeating Alex de Minaur and Ugo Humbert. The teenager had the only break point in the first set, but he let the chance pass him by. In the subsequent tie-break, he improved, winning all seven points to secure the set. In the second set, Rune played even better and was rewarded with a serve break as he quickly jumped out to a 4-1 lead. When the score was 5-2, Rinderknech served to stay in the game, but the Dane broke his serve to take the victory 7-6(0), 6-2.

Rune’s firepower can be dealt with by Bautista Agut, so the kid will need to modify his strategy accordingly. The young man, who has been successful against a range of opponents, should be able to defeat the Spanish veteran and get to the final.