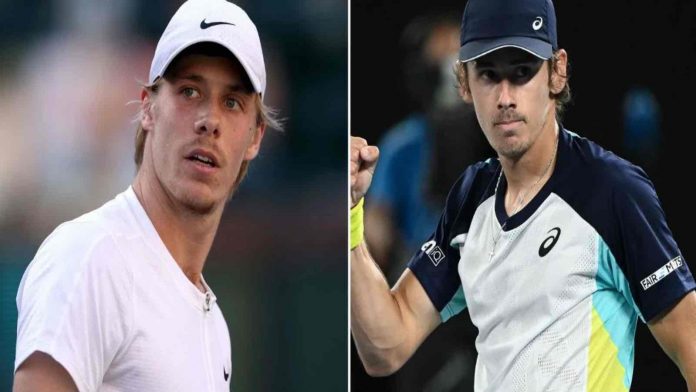 On Friday, Denis Shapovalov and Alex de Minaur will square off in the 2022 Stockholm Open quarterfinals.

Shapovalov faced qualifier Antoine Bellier in the second round after receiving a bye in the opening round. The Canadian got things started with a service break in his favour and increased his advantage with a hold of serve to go up 2-0. He clung to the lead until the first set’s conclusion to secure it. For the majority of the second set, the two players remained evenly matched, with no player ever approaching a break point until the very end. In the 11th game of the set, Shapovalov made the crucial break to take the lead and make it 6-5. He then served out the match to win 6-4, 7-5.

In the opening round, Alex de Minaur defeated Benjamin Bonzi 6-3, 6-1. J.J. Wolf, who over the weekend advanced to the final of the Firenze Open, was his opponent in the second round. De Minaur got off to a slow start in the match, falling behind 2-0, but he quickly managed to go back on serve to even the score at 2-2. He rose to serve the opening set after Wolf held his serve. Before effectively serving the rest of the set, De Minaur had to negate three break points. He broke serve to begin the second set, and he quickly moved out to a 5-1 lead. Wolf was no match for the Australian, who quickly finished the match to win 6-4, 6-2.

De Minaur has a 3-0 advantage against Shapovalov in their previous three meetings. At the 2022 Canadian Open, he defeated them in two close sets.

Although the Canadian has yet to defeat de Minaur, this appears like a decent chance for him to do so. Being the runner-up in Stockholm, he knows how to manage the circumstances here and has momentum on his side. Shapovalov has been playing thoughtful tennis and considering his shot selection. Despite the fact that he has more hitting power in this matchup, de Minaur has been able to defeat him thanks to his dependability and defensive skills. Shapovalov might be able to defeat the Australian for the first time if he doesn’t fire too fast during the rallies.