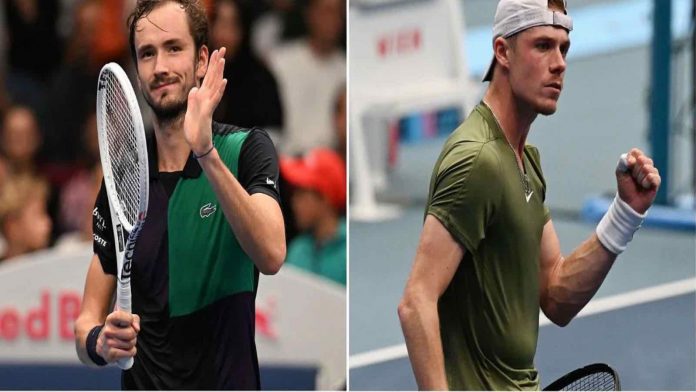 Daniil Medvedev, the 2021 US Open champion, will compete on Sunday against Denis Shapovalov, ranked 19th in the world, for the 2022 Erste Bank Open championship.

In straight sets, Medvedev defeated Jannik Sinner, Dominic Thiem, and Nikoloz Basilashvili to advance to the semifinals, where he faced Grigor Dimitrov. In the fifth game, the Russian scored first by breaking his opponent’s serve to lead 3-2. Later, when the score was 5-4, Dimitrov saved a set point on his own serve but was unable to produce a strong comeback. In the following game, Medvedev easily served the set out to complete the match. The match was won 6-4, 6-2 by the former World No. 1 who turned up the heat in the second set by winning five straight games.

Shapovalov, on the other hand, defeated Dan Evans, Taylor Fritz, and Jurij Rodionov to advance to the last eight. In the semifinals, Borna Coric was his opponent. In the opening set, which transitioned into the tie-break, neither player even came close to having a break point. To win the set, the Canadian had the upper hand in it. In the second set, Shapovalov recovered his rhythm and won six straight games to take the victory 7-6 (4), 6-0.

Five previous matchups between the two have resulted with Medvedev holding a 3-2 advantage. He defeated them in straight sets in the Western & Southern Open in 2022.

This week, Shapovalov has been playing some calculated and tactical tennis, but Medvedev has been performing at a completely different level. On Sunday, look on the Russian to win his second championship of the year.