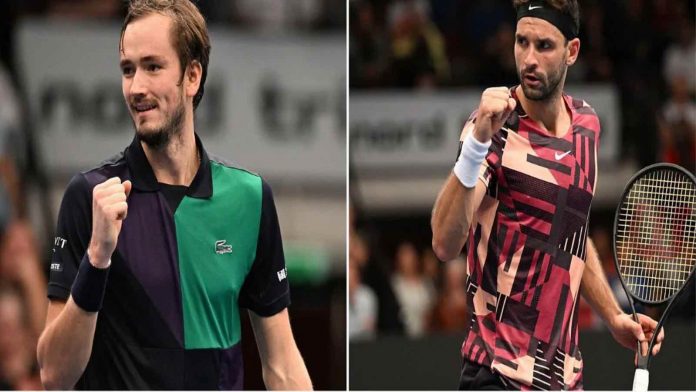 Daniil Medvedev, the 2021 US Open champion, and World No. 32 Grigor Dimitrov will square off in the 2022 Erste Bank Open semifinals on Saturday.

In the quarterfinals, where Jannik Sinner awaited him, Medvedev breezed past Nikoloz Basilashvili and Dominic Thiem in straight sets. The Russian got the match started well by breaking his opponent’s serve in the first game and extending his lead with a hold of serve. After then, neither player faltered on service, and Sinner even avoided a set point when on serve in the ninth game. The next game was won by Medvedev by serving the final point of the opening set. In the second set, the former World No. 1 quickly took a 3-1 lead. In order to win 6-4, 6-2, Medvedev continued to dominate his opponent and took the final three games.

Dimitrov defeated Thiago Monteiro and Andrey Rublev to advance to the round of 8, where he faced Marcos Giron. Until the set’s conclusion, the Bulgarian maintained the lead and claimed it. In the second set, Giron upped his game and was the first to lead by a break. However, Dimitrov quickly rallied to tie the match. In the tenth game, the American broke his opponent’s serve to win the set. With a break advantage and a 2-1 lead in the third set, Dimitrov blew his opportunity to put Giron back in the match. In the ninth game, he managed to break serve once again to win the match 6-3, 4-6, 6-4.

The two have faced off five times previously, with Medvedev holding a 3-2 advantage. At the Indian Wells Masters in 2021, Dimitrov defeated them in three sets.

Dimitrov has the talent to challenge the Russian at his best. However, Medvedev is currently in menacing shape and should be able to easily defeat his opponent.