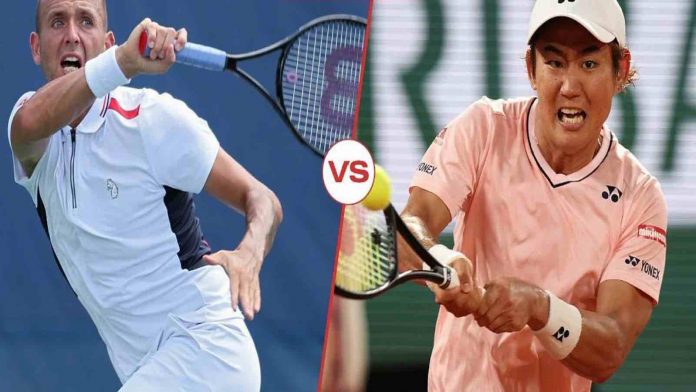 On Tuesday, September 27, Dan Evans, the 25th-ranked player in the world, will face Yoshihito Nishioka in the opening round of the 2022 Korea Open.

Evans advanced to the semifinals of the San Diego Open after receiving a bye in the first round thanks to victories against Taro Daniel and Constant Lestienne. And that was the last victory he had, as American Marcos Giron defeated the British player in straight sets to advance to the championship match. Evans would be happy to have advanced to the semifinals for just the third time this year, but overall, his form continues to be a cause for concern. Sure, he reached the semifinals of the Montreal Masters earlier in the season, but aside from that, Evans has never won three straight matches at the highest level.

Nishioka unexpectedly reached the Washington Open final earlier this season, which was made even more unexpected by the calibre of competition he defeated before falling to Nick Kyrgios in the title match.
In that run, he also defeated Evans, as well as Jenson Brooksby, Alex de Minaur, Karen Khachanov, and Andrey Rublev. It’s interesting to note that none of those matches had Nishioka as the favourite. The world number 53, however, has since since lost four of his next five games, including a loss in the opening round of the Vancouver Challenger.

All five occasions that they have faced off, Nishioka has prevailed over Evans.

While neither have had a spectacular season so far, Nishioka leads the head-to-head by a big enough margin to have the odds tipped in his favour.