The SportsLiteSports at just one click!
HomeTennisCincinnati Open: Who will be the Men's finalists?
Tennis

Cincinnati Open: Who will be the Men’s finalists?

It is likely Daniil Medvedev will face Borna Ćorić in the finals of the Cincinnati Open 2022. 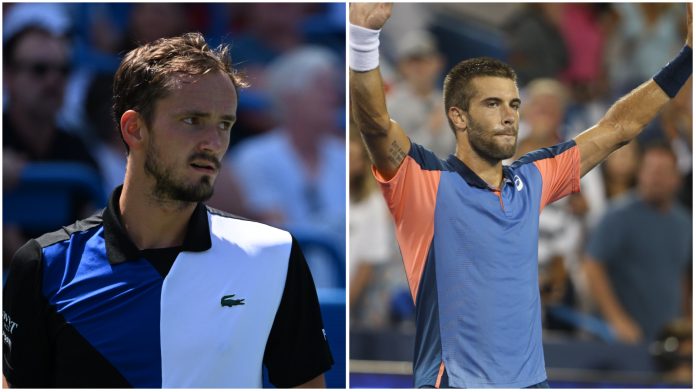 The hard court season is yet again back before the beginning of the U.S Open 2022. The Cincinnati Open, also known as the Western & Southern Open, is an ATP Masters 1000. This tournament came a long way to the semi-finals after witnessing top players lose against sensational players.

The tournament began on August 14 with a primary draw size of 56 players under ATP Masters 1000 (Men’s Singles). Throughout the tour, till the quarter-finals, few commendable performances were showcased from players out of the box.

Novak Djokovic was the 2018 champion & also became the only player in Cincinnati to triumph in 2018.

Cincinnati Open: Who will be the Men’s finalists?

Will Daniil Medvedev be the first finalist?

The first semi-final will be played between the top seed & World No one, Daniil Medvedev and the 4th-seed Stefanos Tsitsipas. The new World No one seems to be in a God mood after reaching yet another ATP Masters 1000 semis. He is yet to drop a single set to reach the semi-finals, even though, it was a tough road to reach into.

The 2021 U.S Open champion, Daniil Medvedev will be the favourite on the American courts to defeat Tsitsipas. He encountered Taylor Fritz with some ease in the first set tiebreak which was enough for him to lead in the match. Medvedev has always been in light of his great defensive ability, to cover full court and play from far behind the baseline.

Will Borna Ćorić be able to make it to the final?

Cameron Norrie, 9th seed, will meet Borna Ćorić in the second semi-final on Saturday. This match will be very exciting for the fans as the 25-year-old Croatian, Borna, has been on another level this tournament. He seems to be unstoppable after his brilliant & unbelievable win over the 2022 Roland Garros champion, Rafael Nadal. Borna Ćorić defeated Nadal in a tight encounter of three sets 7(11)-6(9), 4-6, 6-3. The young lad also came over the 7th seed, Auger-Aliassime and 15th-seed, Agut Busta, both in straight sets.

Borna Ćorić will be comfortably winning against the British, Cameron Norrie in his first Masters 1000 semi-final to reach the finals. He will surely dominate Norrie a lot of times with his powerful backhand.