The SportsLiteSports at just one click!
HomeTennisCarlos Alcaraz became the youngest quarter-finalist in Cincinnati since 2006
Tennis

Carlos Alcaraz became the youngest quarter-finalist in Cincinnati since 2006 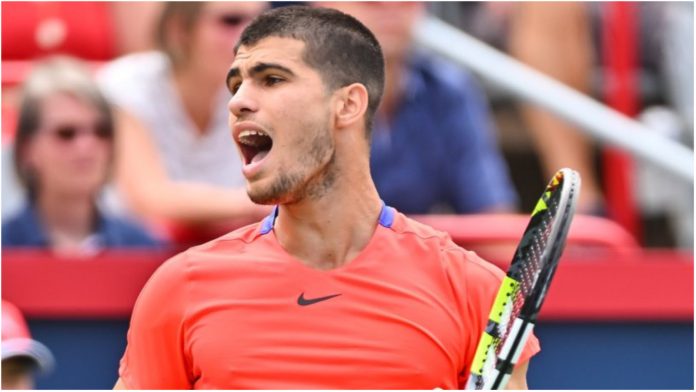 The sensational and dynamic, Carlos Alcaraz is not stoppable as he embellishes as the youngest quarter-finalist in Cincinnati Open since 2006. The young and superbly talented Spaniard defeated the 33-year-old semifinalist, Marin Čilić in the third round.

Carlos Alcaraz became the youngest quarter-finalist in Cincinnati since 2006

The Roland Garros semifinalist, Marin Čilić tried his best to suppress his young opponent, however, could not manage to fulfil it. Carlos fought tough in the first set as it was breathtakingly close to anyone. He was hammering huge forehands down the line that was enough for him to take a healthy lead. However, Čilić got some essential breaks at the accurate time to take it to the tiebreaker.

Even though the first set was a little dangling for the 19-year-old kid, he dominated the second set quite comfortably. With two crucial Marin games, he passed through the second set along with the match to be in the quarter-final by 7-6, 6-1.

Carlos elevated to World No 4 in the ATP ranking

Alcaraz has been ranked to his career high as World No 4 due to an ongoing brilliant year. He achieved four titles out of five in his professional career this year including his outstanding performance in the French Open. He has also defeated the top players, Rafael Nadal and Novak Djokovic, prior to making it to the top five. His day-to-day improvising performance on the court has served him quite humongous fame.