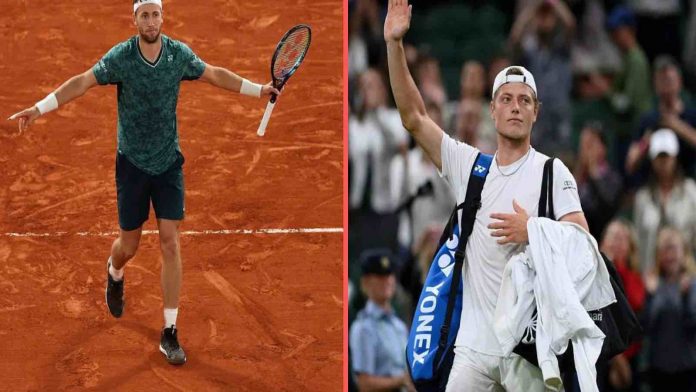 Fifth seed Casper Ruud will face Tim van Rijthoven in the second round of the US Open on Wednesday.

Ruud has put up some outstanding performances this year, making it to his first Masters 1000 final at the Miami Open and his first Grand Slam final at the French Open. In addition, he advanced to the Canadian Open semifinals and took home three ATP 250 titles in Buenos Aires, Geneva, and Gstaad. The Norwegian had a rough start in New York’s first round against Kyle Edmund when he was broken early in the first set. The 23-year-old quickly broke back, though, and went on to take the set 6-3. Ruud prevailed in a closely contested second set, winning it 7-5, before winning the third 6-2 to advance to the second round.

Tim van Rijthoven established quite a name for himself during the grasscourt season when he defeated Daniil Medvedev to win his first ATP championship at the Libema Open. The Dutchman advanced to Wimbledon’s round of 16 but fell to eventual champion Novak Djokovic in four sets. He battled back from two sets down to defeat Zhang Zhizhen of China in the first round of the US Open, saving seven match points en route to a 3-6, 6-7(4), 7-6(9), 6-1, 6-4 victory.

The head-to-head between the two is 0-0 so Wednesday’s match will be their first meeting.

Ruud will start the game as the favourite, but van Rijthoven shouldn’t be discounted because he has defeated some elite competitors this year. The 23-year-old can control the play from the baseline because to his strong forehand. He is also capable of sending in some strong serves. In his previous match, van Rijthoven served 26 aces, and he’ll want to get as many against Ruud. The Dutchman plays with an all-court approach and enjoys making powerful shots. It will also be helpful to get his return of serve. He will still be feeling the repercussions from his five-set match with Zhang Zhizhen, which may further tip the scales in Ruud’s favour.

Prediction: Ruud to win in 4 sets