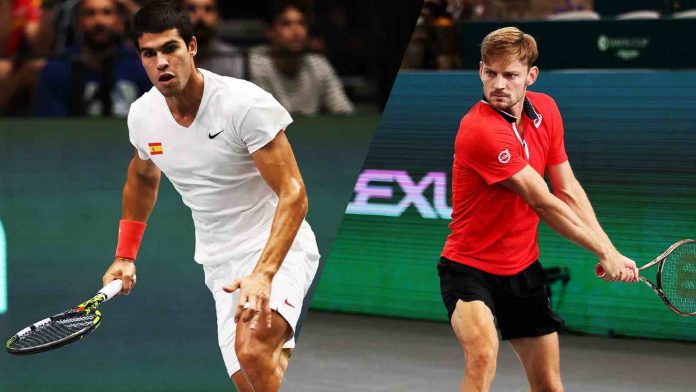 Tuesday’s opening round of the 2022 Astana Open will pit world No. 1 Carlos Alcaraz versus unlucky loser David Goffin.

Alcaraz’s outstanding performances this season have propelled him swiftly to the top of the men’s game. He lost in the third round of the Australian Open before winning the Rio Open, his first championship of the year. He fell short in a hard-fought semifinal match against Rafael Nadal at Indian Wells, but soon after, he won the Miami Open. He fell to Alexander Zverev in the quarterfinals of the French Open, while at Wimbledon, he advanced to the fourth round. After defeating Casper Ruud in the season’s final Major, the Spaniard went on to win his first Grand Slam championship. He also rose to the very top of the list.

David Goffin had a respectable season, taking home the crown in Morocco and making it all the way to Wimbledon’s quarterfinals. He has, however, lost in the opening round of every ATP tournament he has played in since reaching the final eight at the All England Club. The Belgian also participated in the Davis Cup during that time, where he won a few matches. Goffin was only allowed to take part in the qualifying rounds of the Astana Open. He beat Denis Yevseyev, but fell short against Luca Nardi in three sets in a match that was exceedingly close. Holger Rune withdrew, but the lucky loser made it to the main draw after that.

Goffin has never beaten Alcaraz in head-to-head play. At the 2021 Great Ocean Road Open, he defeated them in straight sets.

Going up against an Alcaraz in form won’t be simple for Goffin, who hasn’t won an ATP main draw match in a while. If the teen fails to go safely to the next round, it will likely be remembered as the biggest upset of the year.