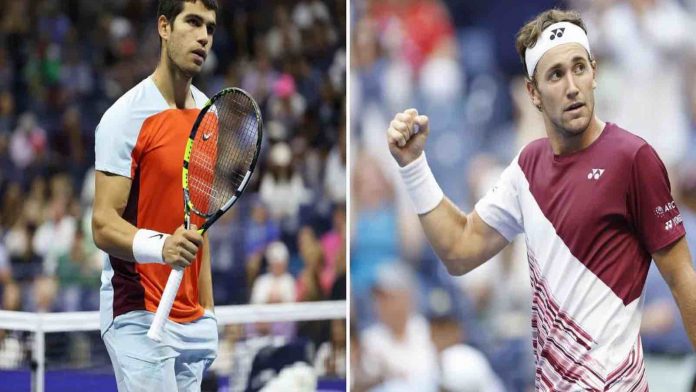 Teen star Carlos Alcaraz and World No. 7 Casper Ruud are set to battle it out for the 2022 US Open title on Sunday.

Alcaraz’s first three victories in New York over Jenson Brooksby, Federico Coria, and Sebastian Baez were all quite easy. In the fourth round and the quarterfinals, respectively, Marin Cilic and Jannik Sinner each took him to five sets. The adolescent’s valiant victory over them led to a semifinal matchup with Frances Tiafoe. In the final set, Ruud becomes the youngest player the Spaniard took an early break to go up 2-0, but the American broke back to tie the match at 2-2. Once more breaking his opponent’s serve, the youngster maintained his composure to move up 4-2. The American lost the match 6-7(6), 6-3, 6-1 6-7(5), 6-3, but the youngster advanced to his maiden Major final thanks to a backhand mistake.

Casper Ruud defeated Kyle Edmund, Tim van Rijthoven, Tommy Paul, Corentin Moutet, and Matteo Berrettini on his way to the semifinals. To advance to the championship round, he faced Karen Khachanov. Ruud quickly took the lead at 5-1 in the fourth set and went on to win the set 7-6(5), 6-2, 5-7, 6-2 and the match to go to his first US Open final. He was second at the French Open earlier this year, making this his second Grand Slam final overall.

Alcaraz leads Ruud 2-0 in the head-to-head. He won their previous encounter at the 2022 Miami Open in straight sets.

This one promises to be a fight to the finish. Ruud’s a challenging player to overcome, but Alcaraz has been on a different level altogether this season. Expect the teenager to be crowned the champion.