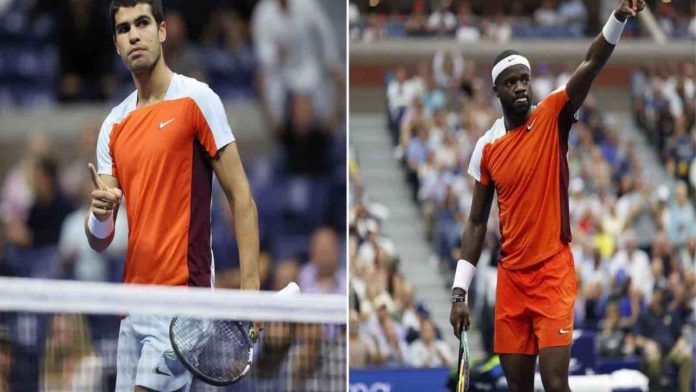 World No. 4 Carlos Alcaraz will square off against home favorite Frances Tiafoe in the semifinals of the 2022 US Open on Friday.

Alcaraz faced up against Jannik Sinner in the quarterfinals after victories over Marin Cilic, Jenson Brooksby, Federico Coria, Sebastian Baez, and Federico Coria. Alcaraz improved his performance and raced off the following four games to win the match 6-3, 6-7 (7), 6-7 (0), 7-5, 6-3. Sinner had a break and led 3-2 in the fourth set.

In the opening round of the US Open, Frances Tiafoe defeated Marcos Giron, Jason Kubler, and Diego Schwartzman in straight sets. Rafael Nadal was defeated by him in the fourth round, giving him one of the biggest victories of his career. This victory set up a quarterfinal matchup with Andrey Rublev. Tiafoe secured the crucial break to take the lead 4-3 in the seventh game. After this setback, Rublev was unable to bounce back, as the American quickly prevailed 7-6 (3), 7-6 (0), 6-4 to go to his first Major quarterfinal.

Tiafoe leads Alcaraz 1-0 in the head-to-head. He won their previous encounter at the 2021 Barcelona Open in straight sets.

Tiafoe could have a difficult time because of the teenager’s well-rounded game, but the American is up for the challenge because to his powerful swing. Additionally, the pressure to make it to their first Grand Slam final may be felt by the team. Unless Alcaraz is utterly exhausted, this match should be competitive. Overall, the Spaniard has been the more reliable player and should be able to defeat his rival by a little margin.

Prediction: Alcaraz to win in 5