The SportsLiteSports at just one click!
HomeTennisWhere to watch Casper Ruud vs Carlos Alcaraz US Open Final 2022?
Tennis

Where to watch Casper Ruud vs Carlos Alcaraz US Open Final 2022?

Check the live streaming of the US Open Final 2022 between Carlos Alcaraz and Casper Ruud. 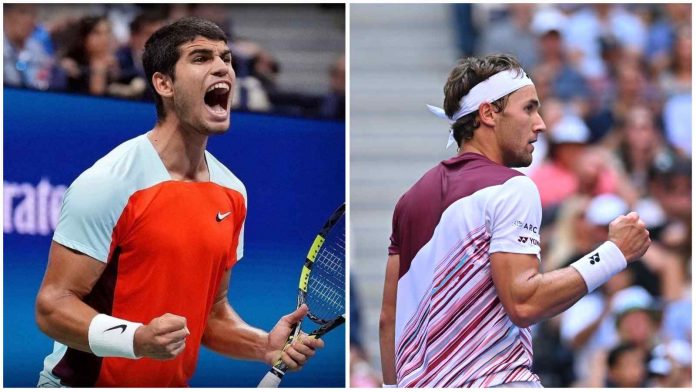 The year’s last Grand Slam, the U.S Open 2022 has come to its last day of this year’s tournament. Casper Ruud will take on the 19-year-old Carlos Alcaraz in the final, also both are on a run for the World No. 1 ATP rank. The finalists have already created history by entering the US Open Final 2022, as Ruud becomes the first Norwegian to advance to US Open final. Carlos Alcaraz becomes the youngest men’s player to enter the final since Rafael Nadal in 2001.

You can look into the highlights of their semi-final of the US Open 2022:

Casper Ruud beat Karen Khachanov and catch the highlights of one of the thrilling clashes between two youngsters, Carlos Alcaraz defeated Frances Tiafoe to enter his first ever Grand Slam final.

The official broadcast partner of the US Open is ESPN, specifically, ESPN2, ESPN+, ESPN3 and the ESPN App. Where can people watch Carlos Alcaraz vs Casper Ruud US Open Final 2022:

When to watch Casper Ruud vs Carlos Alcaraz US Open Final 2022?

The live broadcast of the match will commence at 1:30 AM IST on 12, September and 9:00 PM GMT. It will be played in Authur Ashe Stadium, New York, United States of America.

Check about the women’s singles champion: World No. 1 Iga Swiatek becomes the first Polish to lift US Open Trophy