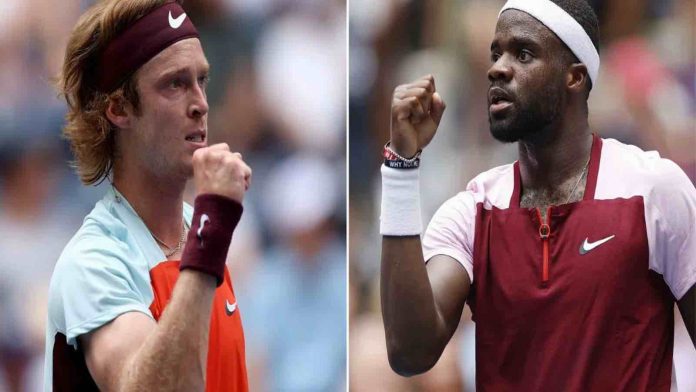 World No. 11 Andrey Rublev will take on home favorite Frances Tiafoe in the quarterfinals of the 2022 US Open on Wednesday.

Rublev advanced to the fourth round and faced Cameron Norrie after defeating Laslo Djere, Kwon Soon-woo, and Denis Shapovalov. For the most of the first set, both players guarded their serves. The Russian won the crucial break in the ninth game, and he then served out the set to win it. In the third set, the Russian took a break advantage once more to lead 3-2. For the first time in the match, Norrie was able to break his opponent’s serve and even the score. The British player took the lead at 4-3 after holding his serve. The Russian improved, though, and won the following three games easily en route to a 6-4, 6-4, 6-4 victory.

Tiafoe advanced to the fourth round of the US Open by defeating Diego Schwartzman, Jason Kubler, and Marcos Giron. Rafael Nadal, a 22-time Grand Slam victor and this year’s Majors unbeaten champion, was the next opponent he faced. In the seventh game of the first set, Tiafoe scored first to make it 4-3. He won the set by serving it out with ease after a couple more games. In response, Nadal won the second set to tie the contest. In the fourth set, where he was up 3-1, the Spaniard showed hints of a comeback. But Tiafoe won the following five games to triumph 6-4, 4-6, 6-4, 6-3.

They have evenly split their previous couple of matches, with the head-to-head being tied at 1-1. Rublev won their last match at the 2022 Indian Wells Masters in straight sets.

The American has been in better form so far and seems primed to emerge victorious in this encounter.

Prediction: Tiafoe to win in 4