Abdul Samad, the hard-hitting batsman from Jammu and Kashmir was born on 28th October 2001 in Kala Kot.

He has Obsession with hitting sixes

He is just 19 years of age but has already achieved so much in his cricketing journey. The naturally aggressive hard-hitting batsman has been famous for his six-hitting abilities right from Galli cricket to the IPL.

He made his domestic debut in 2018–19 Syed Mushtaq Ali Trophy on 21 February 2019. Six months later, he played his first List A match in Vijay Hazare Trophy on 27 September 2019. Debut in the longest format came on 9th December 2019 in Ranji Trophy.

Need a man, got the man 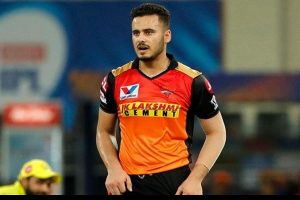 Sunrisers from Hyderabad pounced on the opportunity and bought Abdul Samad for the base price of 20 Lakh Rupees. With this contract, he became the only third player from Jammu & Kashmir to be a part of the IPL team. The other two are Parvez Rasool and Rasikh Salem.

He got the chance to bat on 12 occasions and out of those he has batted 7 times on 7th place.

While Batting at 7th position, he has scored 87 runs striking at 161.11 which is almost equal to his career IPL strike rate. SRH has got a gem at number 7.

He has already hit 9 sixes in 12 IPL innings and has one wicket with his right arm leg-spin.

We hope he will continue hitting sixes and entertain the crowd!