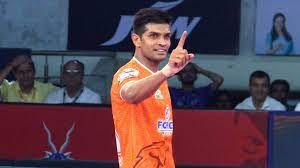 Deepak Ram Niwas Hooda is a professional international kabaddi player. He is consistently making a mark in this sport. Hooda is currently the captain of the Indian National Kabaddi Team. He is a gold medal winner in the 2016 Kabaddi World Cup. He is currently in the team Jaipur Pink Panthers and a 1.15Cr tag player! As we move forward let us learn more about Deepak Niwas Hooda and his Pro Kabaddi League journey.

Running Hand Touch is Deepak’s signature move. In this raider move, the raider runs into the defender’s den with a plan in my mind. The raider target attacks the corners and supports players during a running raid. The player rushes towards a defender and extends his entire body for a quick touch with his hand before escaping to safety.

Also Read- What Are All Types Of Raider Moves In The Pro Kabaddi League?

At the auction of the inaugural season of the Pro Kabaddi League in 2014, Hooda was a recipient of the second-highest bid. He was bought for ₹12.6 lakh by the Telugu Titans. Deepak joined the Puneri Paltan for the third and fourth seasons in 2016. In the third-place play-off, Hooda top-scored with nine raid points for the Puneri Paltan, helping them to make a podium finish in the third season.