Indian high jumper Praveen Kumar clinched the silver medal in the Men’s High Jump F64 event. The Indian broke the Asian record on his way to a historic medal.

Praveen’s silver medal was India’s 11th medal at the Tokyo Paralympics which has proved to be a watershed moment in the Indian sporting timeline. 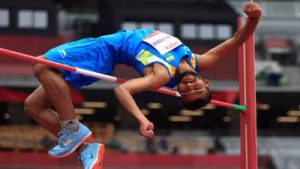 Jonathan took gold with a jaw-dropping jump of 2.10. The bronze medal was grabbed by the defending champion from the 2016 Rio Olympics Maciej Lepiato of Poland. The polish athlete could only produce a best effort of 2.04m.

Kumar is not new to being on the podium of events as prestigious as the Paralympics.

He also won a silver medal in the Junior PARA World Championship in 2019., which also happened to be his debut year.

He is a world number 3 ranked player. Kumar has been training under Indian coach Satyapal Singh since he came to know about Para sports,

T64 category is basically for athletes who use prosthetics due to their legs being amputated.

The Tokyo Paralympics have proved to be India’s best ever as the nation has been able to haul a staggering 11 medals until now.

The badminton medal matches are still to be played where 5-6 Indians have been able to reach the semi-final stages. India has fielded one of the strongest contingents in the badminton field.