The SportsLiteSports at just one click!
HomeBadmintonP.V Sindhu Net Worth, Annual Salary, Cars, Properties, House And Endorsements Details
BadmintonNet Worth 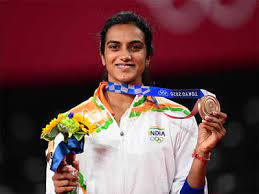 The most successful and decorative badminton star of India registers herself as Pusarla Venkata Sindhu born on 5th July, 1995 in Hyderabad, Andhra Pradesh. She is known for her aggressive playstyle and her performances at big stages like Olympics and World Championships. Besides a successful career Sindhu lives a wealth and joyful life , So here we discuss about P.V Sindhu Net Worth and other points defining her.

P.V Sindhu Net Worth and Lifestyle

Commonwealth Games, Asian Games, World Championships , there might be any stage where the Indian Badminton Queen has failed to deliver. Not only once but on several occasion she has made the Indian Flag go up especially in the just happened Olympics where she managed to bag a Bronze medal in Women’s Single category. Just at a very young age in 2013 she managed to take her ranking in Top 15. In 2018 she was also named the skipper of her PBL side Hyderabad Hunters which made it to the semifinals of the season. In addition she has also received India’s Highest Sporting Honor Major Dhyan Chand Khel Ratna in 2016 for her luminous performances.

The 2019 World Champions was also among the Forbes 2018 & 2019 Top Paid Female Athlete of the year. Moreover, her annual salary is estimated at around RS.6 crores and her total net worth to around RS.44 Crores

Indeed the most successful and most inspirational female athlete is the face of many Indian and the world’s top companies. For instance PNB MetLife, Vizag Steel, Bank of Baroda, Apis Honey, Johnson & Johnson, Moov, Gatorade, Panasonic Battery, Bridgestone, Mission sports, JBL and Myntra. These sponsorship deals are enough to highlight the game level of the star athlete.

Sindhu’s car collection is full of some speedy and namely cars just like her some of which are also gifted to her for her consistent crown performances. Her car collection includes models like BMW X5 BMW 320D, Mahindra Thar, and Datsun Redi-Go.

P.V Sindhu currently resides in Hyderabad with her family in a lavishing house also the notable star received the keys of the house from K Chandra Shekhar Rao.