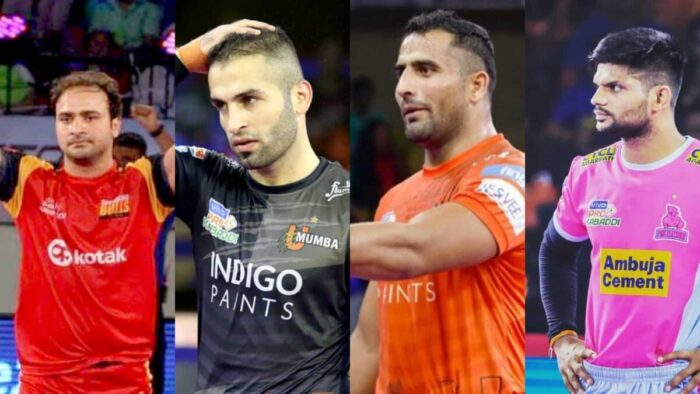 A strong defense line surely pushes the whole team confidence to some another level. Especially in a sport like kabaddi where every point whether in defense or raid is so crucial till the last moment and can totally shift the momentum of the game. So we take a look at the top five defenders in Pro Kabaddi League:

Singh who was an important part of the U Mumba side that lifted the title in the second season of Pro Kabaddi League masters in the right cover position. He has also handled captaincy of the team Bengal Warriors in season 5 in which he also pulled 9 high five’s in the season . He makes it at number five with a total of 278 tackle points in his 94 appearances.

This #10 number jersey hails from the district of Sonepat in Haryana . Sandeep started playing kabaddi just at the age of 8 and has also represented India at the Junior Asiads. He has also been acknowledged with the Best Defender Of The Tournament in season 3 and has an impressive number of 310 tackle points in 125 encounters.

The Pro Kabaddi League is often dominated mostly by the domestic players but Faizal Atrachali is one those those few successful foreign guys that have been impactful on the mat . He has also registered his name in the record book of season 4 where he was awarded with the Best Defender Of The Season. This 2018 Asian Games Gold medalist covers left position and has scored 317 raid points in 107 matches he played.

Born on 7th of December 1990 this right corner defender made his debut in the first season for Dabang Delhi . He was season 2’s Best Defender in which he scored 64 points in just 14 games . Ravinder was also the part of the national team that won silver at the 2018 Asian Games. Being one of those few players to cross the 300 tackles point tally in Pro Kabaddi League he currently stands at number two with 326 points in 112 matches played.

Chhillar was a crucial part of the site that won the 2016 Kabaddi World Cup and is the best defender in this league. Also, Manjeet is considered as one of the best all-rounders in the pro kabaddi league. He is a two-times Asian Indoor games gold medalist. Makes it at number one, with a performance of 339 tackles points in 108 matches.

For more such Interesting Kabaddi news do visit Sportslite.com