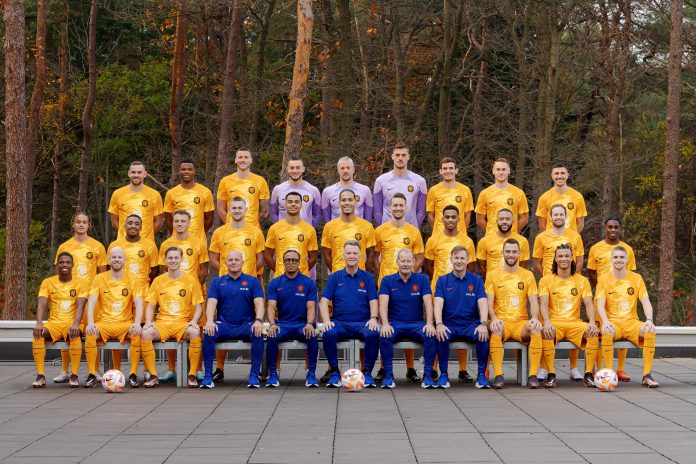 After missing out on Russia, The Netherlands is back and with a squad with ample might to actually win. The Dutch Squad possesses the talent, youth, and chivalrous passion to follow the title dreams.

The Dutch team has qualified for FIFA World Cup ten times. The orange men have placed second on three different occasions, 2010 being the last. In addition to three second-place finishes, the Dutch have reached the semis on two other occasions, in 2014 (3rd), and 1998 (4th). It falls upon the golden kids of the Holland uniform to rebuild the Durch football and they have done it by managing to qualify for the World Cup. Now, Van Dijk and Van Gaal aim to make their best place finish a first.

The squad boasts of talent and power-packed action. The defense is strong in the legs of Virgil van Dijk and de Ligt. Depay, Blind, Gagpo, and de Vrij add quality and excellence to the squad. Scroll Down to Read About the 26 Dutch men who are flying to Qatar.

Players To Watch Out For: The Netherlands

At 28, Memphis Depay is the torch-bearer of the Orange at the 2022 Qatar World Cup. The Barcelona forward has scored 21 goals in the last 15 ouitings for the Dutch side showing signs of never-stopped aggressive passion.

Memphis who started at PSV Eindhoven rose to fame in no short time. He went on to win accolades in PSV moving to United. United wasn’t very good so he moved to Lyon. His relentless passion to get back in form bore fruit when Barcelona fulfilled his lifelong dream of playing at Camp Nou. Memphis who recently got into music has inched closer to beating van Persie on top scoring list for the Dutch. He has 42 goals in 81 games as opposed to Persie’s 50 goals in 102 goals

It is obvious Netherlands got no Cilessen or Krul to pull off heroics in the net. However, they got a 1.93m tall 31-year-old who created a name for himself in the past few years.

It was a doubt whether to prefer van Dijk ahead of de Jong. Counting back on his recent achievements, it is kinda evident van Dijk remains the best candidate. In addition to being a impenetrable wall avoiding the ball rolling into the danger zone, he is a tactical king. Van Dijk is the captain of the squad at Qatar. The Dutch will be hoping that he emulates the fiery tactics and strategies that helped them qualify and stay atop in the recently concluded Nations League semifinals.