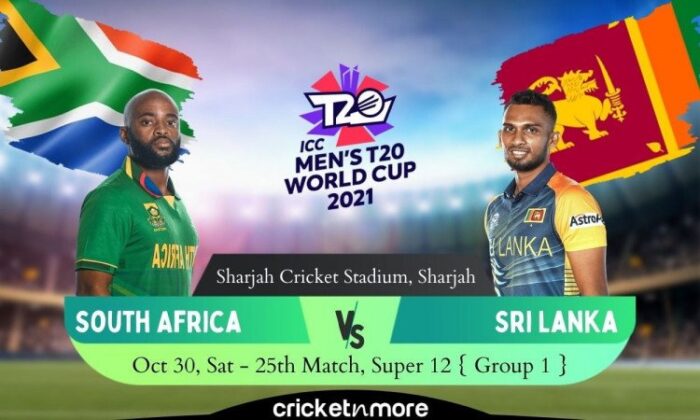 Today’s game between South Africa and Sri Lanka, both the teams in the middle of the points table. Any losses now will sadden the teams as there is very less chance then to qualify from this group. South Africa dominated Sri Lanka in the recent past and De Kock was one of the reasons for that domination. We will also see who won Man of the Match in South Africa vs Sri Lanka match.

Winning toss first, South African captain Temba Bavuma decided to field first. Powerplay was average for both the teams. Sri Lanka scored 39 runs and lose 1 wicket also. None of the batsmen actually spent time on the crease except the opener Pathum Nissanka. He started at a brisk rate but finished the things well for Sri Lanka to get to a respectable score. Sri Lanka scored 142 runs and Shamsi was the pick of the bowlers.

Batting second, South Africa can’t start very well. In the powerplay, they lose both of their openers and scored 40 runs. Temba Bavuma played a captains knock by scoring 46 of 46 balls. He was well set when he was removed by Wanindu Hasaranga who took a Hat Trick today. In the end 25 was needed from 12 balls and David Miller already in the middle with tailenders. But a couple of shots from Miller as well as Rabada ensured South Africa the win an ensured their hopes of finish in Top-2. South Africa won the thriller with 1 ball to spare.

Who won Man of the Match in South Africa vs Sri Lanka match?

Tabraiz Shamsi, for his brilliant spell, was adjudged as the Man of the Match in South Africa vs Sri Lanka match. He bowled brilliant lines and lengths and also an economical spell. He only gave 17 runs in his 4 overs and taken 3 wickets also. Interestingly, 2 of his wickets come as caught and bowled. He actually bowled like a World No 1 bowler in T20Is.

So, this is what we want from World Cup. Thriller matches. South Africa now still have hopes to finish in the Top 2 but it will be difficult given the form of England and Australia. And Sri Lanka virtually are out of the tournament now.