The SportsLiteSports at just one click!
HomeCricketICC T20 World Cup 2021 New Zealand Vs Scotland- Man Of The...
Cricket 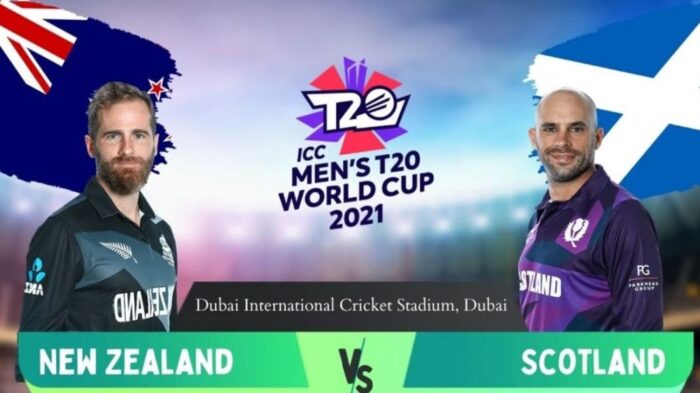 After winning the toss, Scotland opted to field first. In the powerplay, New Zealand scored 52 runs, with Martin Guptill played an attacking innings. And Scotland was able to take 2 wickets also. After the 17 overs, it was looking that New Zealand might score more than 200, as well-set Martin Guptill and Glenn Philips in the middle. But thanks to some pretty accurate death bowling by the Scotland bowlers. They just gave 22 runs in the last 3 overs. But Guptill played a brilliant innings scoring 93 runs of 56 balls. Glenn Philips also gave him good company. And New Zealand set a target of 173 runs for Scotland.

Chasing a big total, Scotland started well. They scored 48 runs of the first 6 overs and lose only 1 wicket. At one time 70 runs needed of 30 balls, which is little too far for Scotland, one feels. But Scotland played exceptionally well. They didn’t win the game but they fought well. They lose by 16 runs. Michael Leask played a brilliant innings in the end as he scored 42 runs of 20 balls. All the bowlers bowled brilliantly.

Who won Man of the Match in New Zealand vs Scotland match?

Martin Guptill, for his brilliant innings, was adjudged as the Man of the Match for this New Zealand vs Scotland match. He played a brilliant innings of 93 runs of 56 balls. He opened for New Zealand and played till 19th over. New Zealand was in trouble after losing three wickets early. But Martin Guptill scored well. His innings was also special as there was very hot out there in Dubai as it was an afternoon match.

With this win, New Zealand got to 4 points. New Zealand won this game but Scotland won the hearts. They showed the potential to be challenging cricket side. They definitely deserve our support and they will surely develop.