The SportsLiteSports at just one click!
HomeCouplesWho is Ben Stokes Wife? Know All About Clare Ratcliffe
CouplesCricketForever Facts

Who is Ben Stokes Wife? Know All About Clare Ratcliffe 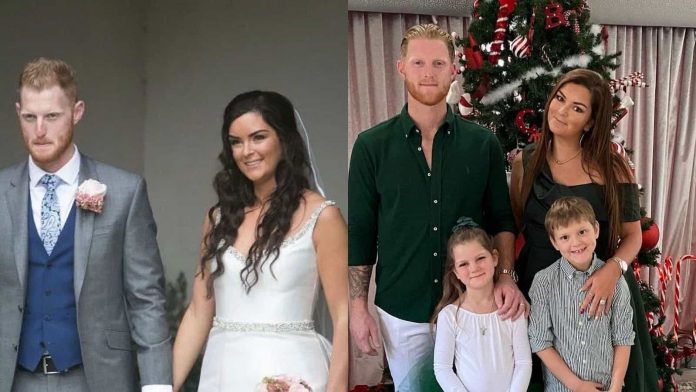 Ben Stokes is an english left-handed all-rounder, plays for England in all forms of cricket. Ben Stokes has an aggressive essence about him on the field which gives an intimidating feeling to the opponent, whether it considers his skills with the bat or the ball. Being born in New Zealand, he has also represented this country in international leagues of rugby. However, after moving to England, he developed an interest in Cricket, and got the opportunity based on his abilities and skills to play for the country internationally. Now, keeping aside his professional career for a while, let’s know everything about Ben Stokes Wife – Clare Ratcliffe’s Age, Height, Instagram, Bio, Kids, Love Story, Net Worth

Clare Ratcliffe is the England all-rounder, Ben Stokes wife and a primary school teacher by profession. However, she has been seen to be currently taken a leave from her teaching career and is a home maker. This could be because she wants to provide all her time and affection to her family and her husband, Ben who mostly stays away from home owing to his professional priorities.

Ben met Clare during his salad days of being a cricketer. This was around August in the year 2010. Clare got to know Ben Stokes as someone who is a cricketer and later sent a friend request on Facebook which started off their chemistry. Simultaneously, after chatting and hanging out a bit, Stokes took her with him to some of his games. Their relationship started growing with the time. However, it was a long-distance relationship at first because the cricketer lived at Durham and his lady love was completing her studies in Taunton.

Almost after five months of dating each other, the pair made their relationship official and started posting photos of them together on Facebook and Instagram. After the completion of Clare’s studies, they started to stay as a live-in couple for a long time and became parents to their lovely son, Layton in the year 2012. Although, at that point of time the couple were not even engaged. Soon after, Clare Ratcliffe’s father died a tragic death following which the cricketer proposed to her in the year 2013. The beautiful duo stayed engaged to one another for four years before they walked down the aisle on the 14th of October in 2017.

Does Ben Stokes Have Any Children?

All You Need To Know About Clare Ratcliffe:

Clare Ratcliffe was born on the 7th of October in Somerset, United Kingdom. She is a primary school teacher by profession but seems to have currently taken a leave to look after her husband and two children. Clare has been the biggest supporter of Ben Stokes as a fan or a viewer and never left his side. She has constantly been with him since his salad and fresh days in Cricket until now. Currently, Clare is a happy wife but a “cricket widow” and a “parent to two monsters”. These terms are given to the cricketer’s lady love all by herself, which definitely is a means of laughter.

Shruti Singhhttps://thesportslite.com/
A person who is super interested in sports, not to mention, a Cricket fanatic, and also loves to write.
RELATED ARTICLES
Couples