The SportsLiteSports at just one click!
HomeCricketICC T20 World Cup 2021: Sri Lanka vs bangladesh- Man of the...
Cricket 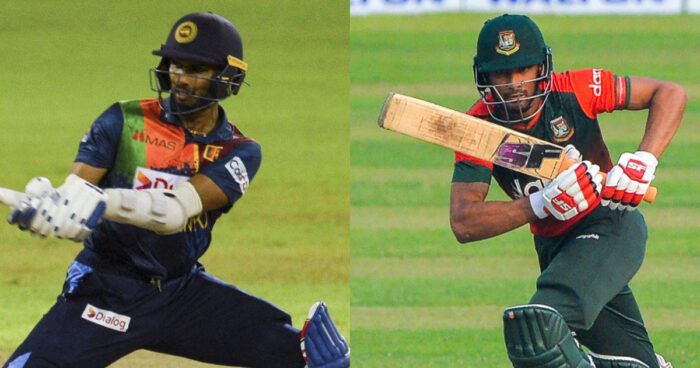 It’s the Super Sunday and it’s the Asian subcontinent which contest today in both the matches. After qualifying, it is the first match for Bangladesh as well as Sri Lanka. And they are in the Group of Death. The match was in Sharjah, so we’ll see how both the teams reacted to the slow pitch of Sharjah. We will also discuss who won Man of the Match Award in Sri Lanka vs Bangladesh match.

After winning toss, Sri Lankan captain, Dasun Shanaka decided to bowl first. Sri Lankan bowlers did bowl well and Bangladeshi batsmen were not able to score runs easily. After the powerplay, Bangladesh were 41-1. It was a quite decent score, not too good, not too bad. Mohammad Naim played a brilliant knock of 62 of 52 balls and set a good platform for the coming batters. In the end, it was all Mushfiqur Rahim show. He played a handy and a fiery knock of 57 runs off 37 deliveries. He came when his team was in pressure, but soaked the pressure well, and took his team to a good score of 171-4.

In the first innings, there were quite some incidents which should not have been taken place. When Lahiru Kumara took the wicket of Liton Das, he has a word or two with Das, and the batsmen didn’t like it at all. It turns even more uglier that umpires need to intervene. Players also getting physical, they pushed each other. This is not what we expect from such International teams at this level.

Coming to the second innings, Sri Lanka will have to bat exceptionally well, if they want to chase that. But they lose their opener in the first over and Bangladesh got a start what they have expected. Sri Lanka lost their hopes as within 10 overs, they lose 4 wickets. But then came Charith Asalanka. He played fearlessly and made a brilliant partnership with Bhanuka Rajapaksa. Their partnership and a couple of dropped catches by Liton Das made that Sri Lanka defeated Bangladesh by 5 wickets.

Who won Man of the Match award in SL vs BAN match?

Charith Asalanka was adjudged Man of the Match for his brilliant knock of 80* of 49 balls. Not to forgot it came on the surface of Sharjah, which is quite slow in the middle overs. But Asalanka batted beautifully and changed the momentum of the game. He came when his team was in pressure and soaked the pressure well and scored fiery runs and made a brilliant partnership with Bhanuka Rajapaksa.

This brings the end to the Sri Lanka vs Bangladesh match. We saw everything, from layers fights to Mushfiqur fiery knock and then Asalanka’s fiery knock.