The SportsLiteSports at just one click!
HomeCricketAb De Villers Road - Is There Any Road In India Named...
CricketIPL 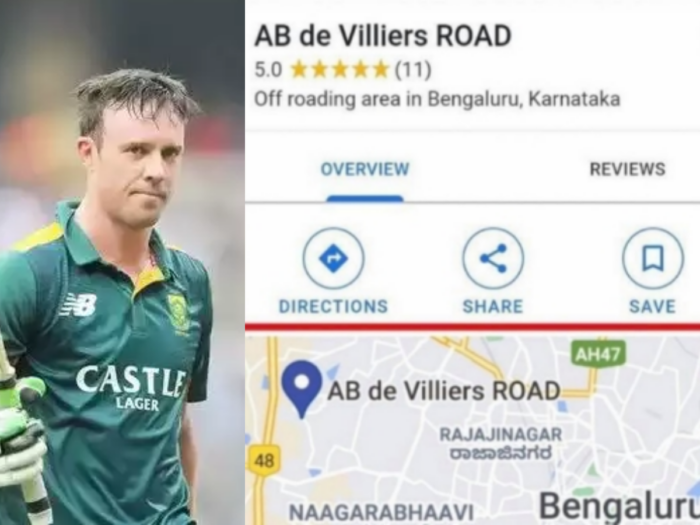 Abraham Benjamin de Villiers better named as his pitch name Ab De Villers. The South African is known for its accelerated batting strike rate. Not only this but also he holds the record of fastest 50, 100 and 150 in ODI cricket. Along with it AB is the batsman ever to average above 50 with a strike rate of above 100. The 37 years old made his international debut on 17 December 2004 against England and played his last against Australia on 30 March 2018. De Villers is just not another name in cricket he is well known for his 360-degree playing style. Also, he has been nominated for the Sir Garfield Sobers Award for ICC Male Cricketer of the Decade, and the award for ODI cricketer of the decade in 2020. So below here we discuss about his fam in India and Ab De Villers Road.

De Villers has been seen in many domestic franchises like Brisbane Heats, Lahore Qalandars and many others. But his all-time close heart team remains the ” The Royal Challenger Bangalore”. Moreover, he added in an interview that he is loved more in India than in his home country. As a matter of fact, “Mr.360” proposed to his girlfriend, Danielle Swart, in India At the Taj Mahal in 2012. He has given some immense contribution in RCB’s important matches that lead him to this fam in India. However, one can see the ‘AB de Villiers ROAD’ by zooming near the region Rajaji Nagar but is clear that it was not named officially by the government. Furthermore, it was disclosed that some fan has named an unnamed road on maps. Thus, it all lead to the naming of the viral “Ab De Villers Road” .