There were expectations that the 23-year-old Dahiya would become India’s youngest Olympic champion but the Russian defended well to win comfortably.

Ravi Dahiya was trailing 0-2 in the first round before he bounced back to level the score but the round ended with Uguev ahead 4-2. 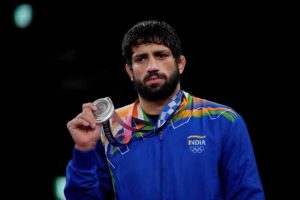 Uguev then raced to a 7-2 lead before Dahiya fought back with 2 more points but couldn’t overturn the 3-point deficit in the end and lost the bout, but not without giving the Russian a tough fight.

This is India’s second silver medal and fifth medal overall at the Tokyo Olympics.
Prime Minister Narendra Modi tweeted, “Ravi Kumar Dahiya is a remarkable wrestler! His fighting spirit and tenacity are outstanding. Congratulations to him for winning the Silver Medal at Tokyo 2020. India takes great pride in his accomplishments.” 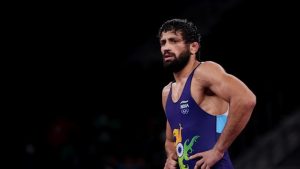 “India is proud of Ravi Dahiya for winning Silver. You came back into bouts from very difficult situations & won them. Like a true champion, you demonstrated your inner strength too. Congratulations for exemplary wins & bringing glory to India” wrote President Kovind on Twitter.

Dahiya had lost to Uguev at the 2019 World Championship also.

The wrestler from Nahri village in Haryana had outclassed Colombia’s Tigreros Urbano (13-2) in his opener and then outwitted Bulgaria’s Georgi Valentinov Vangelov (14-4) in the quarterfinals.
In the semifinals, he erased a massive 2-9 deficit to pin Nurislam Sanayev.