Indian men’s team defeated Germany 5-4 in the bronze medal match to end a 41-year wait for an Olympic medal in hockey. The last time India had won a medal in hockey was at the 1980 Moscow Games where they got the gold.

On Thursday, India brought an end to the medal jinx, getting the better of the Germans in a thrilling comeback win. Simranjeet Singh scored a brace while Hardik Singh, Harmanpreet Singh and Rupinder Pal Singh also got their names on the scoresheet for India.

Germany had taken an early lead with Timur Oruz scoring in the second minute of the first quarter. 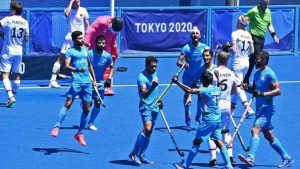 Simranjeet Singh scored in the 17th minute to draw India level at 1-1. Germany, however, came roaring back and scored two more goals in the second quarter to lead 3-1.

Hardik Singh pulled a goal back for India to make 2-3 while Harmanpreet Singh yet again found back of the net to put India on level terms at the end of the second quarter.

The third quarter proved to be the most fruitful for Manpreet Singh’s side as Rupinder Pal Singh made no mistake with his penalty stroke to give India a stunning 4-3 lead. 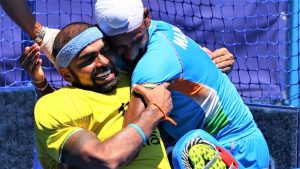 Things only got better as Simranjeet Singh scored his second goal of the match to give India a 5-3 lead, going into the final quarter.

Germany pushed hard in the final quarter and out of the numerous penalty corners they got, managed to convert one to trail India by one goal.

Indian players, however, defended stoically and managed to keep their one-goal lead intact.

With just seconds left for the game to end, Germany was awarded a penalty corner. PR Sreejesh, though, repelled the ball away from the goal as Indian players fell to the ground in pure joy, finally ending the long wait for a hockey medal at the Olympics.