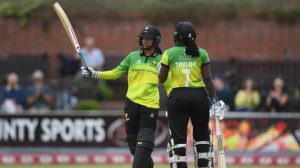 The match was between Western Storm and Loughborough Lightning. The match was reduced to 6 overs per innings due to some reasons.

In a 6 over game, you have to hit the ball from the word go and Smriti did exactly that. She was perfectly supported by Rachel Priest who scored 25(13). When Rachel got out the score was already 71 in 5 overs.

Smriti obviously was the enforcer and she did enforce with 5 fours and 4 sixes with a strike rate of 273.68. She remained not out at the end of 6 overs and Storm scored 85/2.

Lightning didn’t lose any wicket but neither they chased the target and Storm won by 18 runs thanks to storm like innings by Smriti Mandhana.