The SportsLiteSports at just one click!
HomeTennisRafael Nadal will become the first man to make history if wins...
Tennis

Rafael Nadal will become the first man to make history if wins the U.S Open in 2022

Rafael Nadal is still unbeatable in Grand Slams, will he be able to continue the streak? 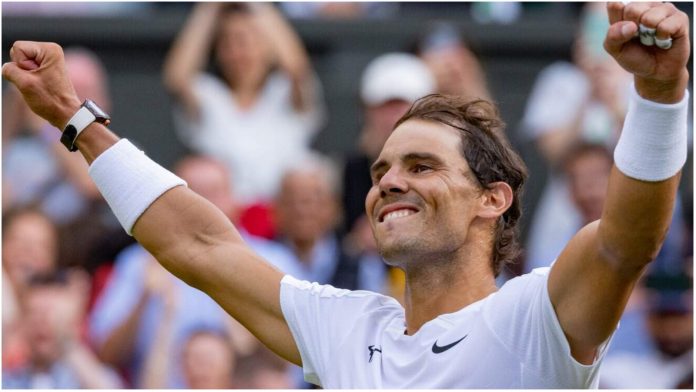 The 22-time Grand Slam champion, Rafael Nadal will be the first man since Rod Laver to be undefeated in all four majors in the same year. The only man to achieve such a milestone is Rod Laver twice in the years 1962 and 1969. The Australian former tennis player was the greatest of his time, winning 11 Grand Slams consisting of eight titles in just two years (1962 & 1969).

After a major ankle injury in late 2021, he was set out of court for recovery. The 36-year-old comeback this year with a complete ultimatum to stand back. His incredible and unbelievable form made his fans astonished.

Rafael Nadal will become the first man to make history if wins the U.S Open in 2022

Nadal lifted his 21st major title in the Australian Open 2022

The Spaniard was unbelievably incredible throughout the tour. While entering the main draw Nadal competed as 6th-seed and defeated a couple of top 20 players. Nadal was so exceptionally showcased his defence & fired forehands. He defeated the 2nd-seed Daniil Medvedev to prove everyone wrong about his injury making him weak.

Even after facing two break points and two match points for Medvedev, however, he kept the match on until he turned the table against Daniil. He snatched the last crucial game from Daniil to win by 2-6, 6-7, 6-4, 6-4, 7-5.

As known as the “King of Clay”, Rafa was at the peak of his professional career and leading the big three’s being one. His preparation for the clay was also quite strong with two finals including one title in the Mexican Open. Nadal was undoubtfully unbeatable through to his final with a touch of luck in the semis. Alexander Zverev’s misfortunate ankle injury gave him an open way to the finals against Casper Ruud by 6-3, 6-3, 6-0.

Rafael crushed out the 1st-seed and former World No one Novak Djokovic in a dramatic four-setter match in the quarter-finals. This was a sign of his being unconquerable till lifting the trophy that he has recorded achieved thirteen times.

The magical year for Rafael Nadal was still mesmerizing and unbeatable. The 22-time Grand Slam champ competed directly in the Wimbledon 2022 without playing any grass court tournaments. He was on a streak of nineteen unbeatable matches until he could play his 20th match (semi-final) he decided to withdraw. Rafa however managed to beat Taylor Fritz in the quarters in the last set of decider tiebreak but could not manage his abdominal discomfort.

Nadal faced abdominal pain, which haunted him for a couple of weeks, and ultimately made him stop from his third Grand Slam title of the year. However, he is still unbeaten in the Grand Slams. If he continues the same first-class performance in the U. S Open 2022 then he will make another record.