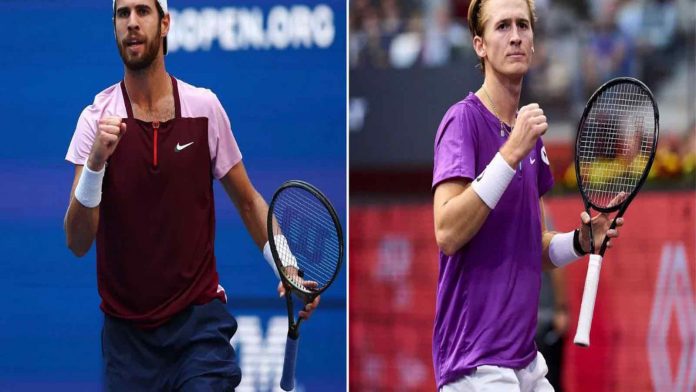 The 2022 European Open’s second round will feature World No. 36 Sebastian Korda versus Karen Khachanov, who had a bye in the first round.

Khachanov has so far had a really strong season. He began the year by coming in second place at the Adelaide International 1, where he lost to Gael Monfils in the championship match. Additionally, he advanced to the Serbia Open and Qatar Open semifinals. The Russian’s maiden Major Major semifinal appearance at the US Open, though, has been the highlight of his season. Before falling to Casper Ruud in New York, Khachanov overcame Denis Kudla, Thiago Monteiro, Jack Draper, Pablo Carreno Busta, and Nick Kyrgios. A month later, he made it to the quarterfinals of the Astana Open after making a comeback.

American Marcos Giron faced Sebastian Korda in Antwerp’s opening round. Toward the end of the first set, the 22-year-old broke his rival’s serve to win it. In the second set, the pair successfully defended their serves, with Korda being the only one to have a break point, which he failed to take. In the tie-break that followed, Giron won seven straight points to force a third and final set. In the opening games of the third set, the pair traded service breaks but then held their serves well. In the match’s closing moments, Korda improved, winning the final three games in a row to prevail 6-3, 6-7 (0), 6-4.

The two have split their two encounters evenly so far, tying their head-to-head record at one each. At the Western & Southern Open in 2022, Korda triumphed in their prior meeting in straight sets.

Both players are capable of exchanging blows from the baseline and appear to be competitive with one another in that area. Since last week, Korda has been playing some excellent tennis, and with momentum on his side, he will be the favourite going into this match.

Prediction: Korda to win in 3