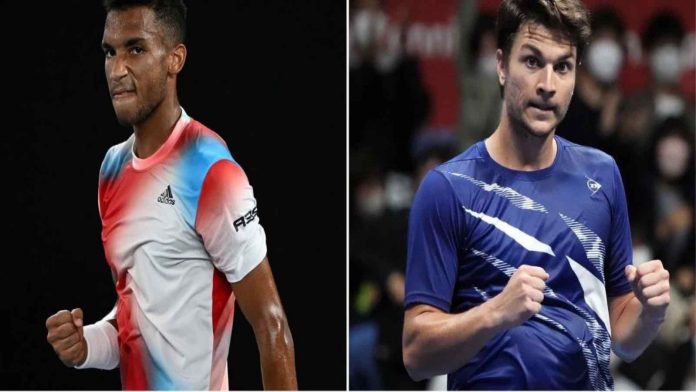 The second round of the 2022 Swiss Indoors will take place on Thursday, with third seed Felix Auger-Aliassime facing off against world No. 28 Miomir Kecmanovic.

In the opening round, Auger-Aliassime was paired up against Marc-Andrea Huesler. In the first set, he twice had set points on his opponent’s serve at 5-4 and 6-5, but the Swiss won the resulting tie-break to win the set. At 5-4 in the set, the Canadian had a set point on Huesler’s serve but couldn’t win it. However, he managed to finish the set alone in the ensuing game to tie the match. For the most of the decisive set, both players maintained solid serves. As the game came to a close, Auger-Aliassime upped his level, winning the final three games to secure a 6-7 (3), 6-4, 6-4 victory. Additionally, it was his tenth straight triumph.

In the opening round, Miomir Kecmanovic faced up against Alejandro Davidovich Fokina. Midway through the first set, the pair exchanged service breaks but otherwise held their serves consistently. Following that, the Spaniard won the tie-break to win the set. At the beginning of the second set, Kecmanovic was on break point but was able to save it. The Serbian embarked on a four-game run to win the set after breaking his opponent’s serve twice. The last set was even more one-sided, with Kecmanovic winning it with just one point remaining to seal a comeback triumph of 6-7 (5), 6-2, 6-1.

In the head-to-head matchup, Kecmanovic is up 2-1 on Auger-Aliassime. At the Davis Cup in 2022, the Canadian prevailed in their most recent match in straight sets.

Given how brilliantly Auger-Aliassime served in this first round, Kecmanovic might have a hard time getting any traction against him once more. The Canadian has been on a roll lately, taking home victories in Florence and Antwerp back-to-back. His progress doesn’t seem to be slowing down any time soon.