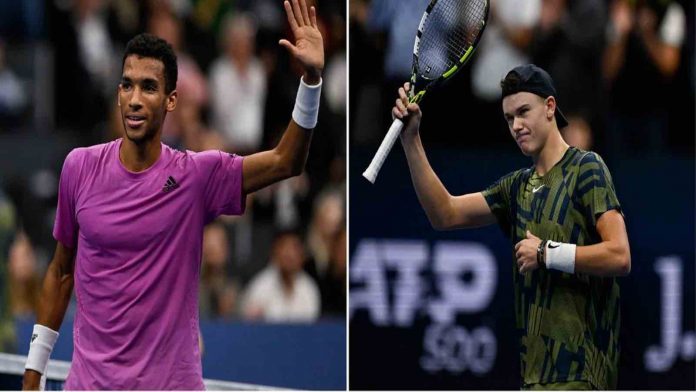 9 in the world In the 2022 Swiss Indoors final on Sunday, Felix Auger-Aliassime and adolescent idol Holger Rune will square off.

Miomir Kecmanovic and Alexander Bublik were both defeated by Auger-Aliassime in straight sets, setting up a semifinal matchup with World No. 1 Carlos Alcaraz. In the ninth game of the set, Auger-Aliassime gained the crucial break to move 5-3 ahead, and he then served out the set to take the lead. With a quick 3-1 lead, Auger-Aliassime carried the momentum into the second set. Alcaraz put up a fight in the end but was unable to stay up with his rival. When attempting to end the proceedings, Auger-Aliassime ran into a little snag. He blew his first match point, forcing him to rescue a break point in the process. In order to win the game 6-3, 6-2, the 22-year-old ultimately broke down his opponent’s resistance.

To advance to the semifinals, Holger Rune defeated Arthur Rinderknech, Ugo Humbert, and Alex de Minaur in straight sets. He was unable to advance to the championship round because of Roberto Bautista Agut. In the first set, which was decided by a tie-break because neither player was able to break the other’s serve, Rune prevailed. The pair faced a few break point opportunities in the second set, but they were able to save them and maintain their serve as the match entered its second tie-break. Rune defeated Bautista Agut 7-6 (1), 7-6 after the Spaniard had taken a 6-2 lead in the tie-break and had four set points (6).

The young Dane is playing aggressively these days and can compete on baseline with Auger-Aliassime from the back of the court. It’s a difficult match-up to predict, but given their previous results, it should be a great final. The two players are comparable in most areas of their games, but the Canadian has more playing experience, which may ultimately work to his advantage.