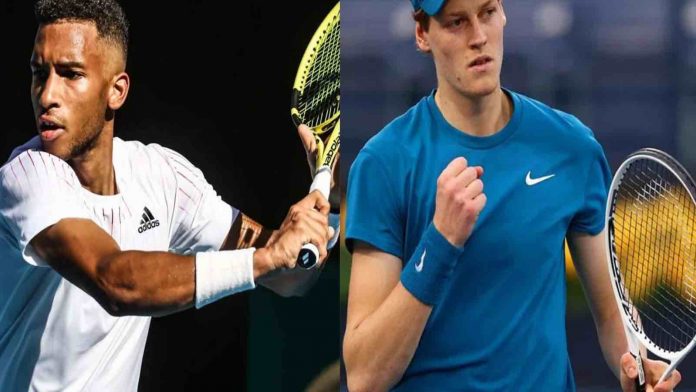 Felix Auger-Aliassime and Jannik Sinner will lock horns in the third round of the 2022 Cincinnati Open on Friday.

Till now, Auger-Aliassime has enjoyed a respectable season, winning 35 of 54 games, including his first singles championship. He began the year with a fantastic tennis performance at the ATP Cup back in January. He continued to play well at the Australian Open, making it to the quarterfinals before falling to eventual runner-up Medvedev. After Melbourne, he maintained his form and momentum by capturing his first career singles title there. The 22-year-old entered Cincinnati fresh off a Canadian Open quarterfinal loss to Casper Ruud. He won 6-3, 6-2 over Alex de Minaur to earn this tantalising matchup with Sinner.

Sinner has had a successful season thus far, winning 38 of their first 48 games. He lost to Stefanos Tsitsipas in the Australian Open quarterfinals, ending his tournament. A week later, Hubert Hurkacz eliminated the World No. 12 in the quarterfinals of the Dubai Tennis Championships. The Italian defeated Carlos Alcaraz in the Croatia Open championship match, winning 6-7(5), 6-1, and 6-1 to claim his maiden trophy. He won a tense match against Thanasi Kokkinakis to start his Cincinnati campaign. After his opponent Miomir Kecmanovic was forced to withdraw due to injury, he therefore received a walkover in round two.

Auger-Aliassime leads Sinner 1-0 in the head-to-head.

Sinner has recently had form issues. The victory over Kokkinakis in the opening round wasn’t the most straightforward. On the other hand, Auger-Aliassime won the first round with ease. The Canadian, who consistently makes it to the final eight in recent competitions, ought to be able to defeat the Italian and move on to the next round.

Prediction: Auger-Aliassime to win in 3 sets.