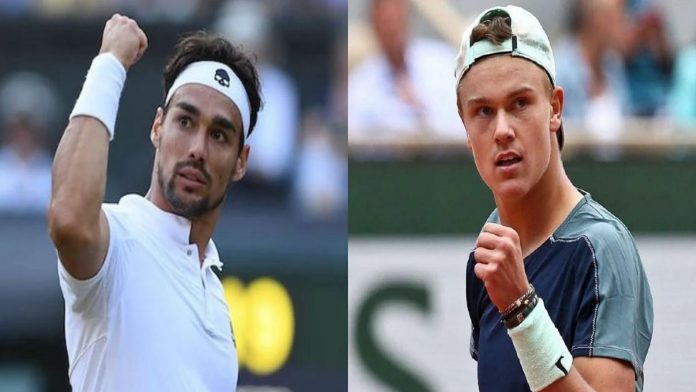 World No. 28 Holger Rune will take on World No. 55 Fabio Fognini in the first round of the Canadian Open on Monday.

Despite having a breakthrough season, Rune’s form is presently poor. His career-high ranking is No. 27, which he achieved on June 6, 2022, after beginning the year as the 103rd-ranked player in the world. The young man was given a wildcard for the 2022 BMW Open, and he eventually won his maiden ATP prize. The 19-year-old made his main event debut at the French Open and advanced to his first Grand Slam quarterfinal, defeating Denis Shapovalov and Stefanos Tsitsipas, before losing to Casper Ruud in four sets. The Dane subsequently had a seven-match losing skid until beating Benoit Paire at the Citi Open, 6-3, 6-2.

Meanwhile, Fabio Fognini is having a disappointing season by his standards. He has accumulated 14 victories and 15 defeats. But in doubles, the 35-year-old has triumphed both the Rio Open and the Croatia Open with fellow countryman Simone Bolelli. The seasoned Italian lost to Federico Delbonis, the Argentine Open favourite, despite reaching the quarterfinals. His finest performances came when he lost to the eventual champions Carlos Alcaraz and Andrey Rublev in the quarterfinals of the Rio Open and Serbia Open, respectively. Fognini defeated Daniel Altmaier in the second qualifier, 6-3, 4-6, 6-2, to advance to the Canadian Open main event.

Rune and Fognini are yet to face off against each other and their head-to-head stands at 0-0.

Rune is an aggressive player and moves around the court with ease. He employs drop shots quite often and has good accuracy using them. The Dane’s undoing is his over-hitting, which creates room for unforced errors. Fognini’s preferred surface is clay. He is known for his big groundstrokes, which he loads with heavy topspin. He also leans on his down-the-line backhand to generate winners. However, the Italian has an unreliable serve which tends to award free points to his opponents.

Prediction: Rune to win in 3 sets.