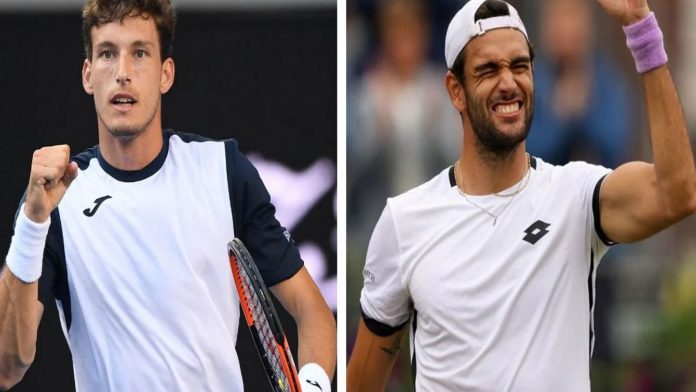 Eleventh seed Matteo Berrettini will face off against Pablo Carreno Busta in the first round of the Canadian Open.

Until now, Berrettini has had a respectable season. The 14th-ranked player in the world with 21 victories and 7 defeats. The Italian had a strong start to the year, making it all the way to the Australian Open quarterfinals. Rafael Nadal, the eventual winner, defeated him in four sets. After that, he underwent surgery, which caused him to miss almost three months of work. After that, incredulously, Berrettini defeated Andy Murray at the Stuttgart Open to win his first championship of the year. Then, as the reigning champion at the 2022 Queen’s Club Championships, he defeated Filip Krajinovic to win his second straight championship of the year. The 2021 Wimbledon finalist had to pull out of the grasscourt Slam after testing positive for Covid 19. In his next tournament, he reached the finals of the Swiss Open but lost to Casper Ruud.

Meanwhile, Pablo Carreno Busta hasn’t had a very noteworthy season. So far, he has 17 defeats compared to 22 victories. His significant accomplishments include making it to the semifinals of the Swedish Open, the Halle Open, and the Barcelona Open final, when he was defeated by his close friend Carlos Alcaraz. The Spaniard advanced to the fourth round of the Australian Open earlier this year but lost to his current rival Matteo Berrettini in straight sets.

Berrettini and Carreno Busta have met each other on one occasion, at the 2022 Australian Open. The Italian defeated the Spaniard in the encounter, thus leading the head-to-head 1-0.

the World No. 14 is an aggressive all-court player. He likes to keep rallies short and uses his forehand to hit solid winners from the baseline. He also likes approaching the net to finish points in his favor. Carreno Busta, meanwhile, keeps things calm and steady. He likes to dig deep into the rallies and force errors out of the opponent. The Spaniard will try to extract errors from Berrettini’s weaker backhand. However, Berrettini should be able to win his first match in Montreal.

Prediction: Berrettini to win in 3 sets.