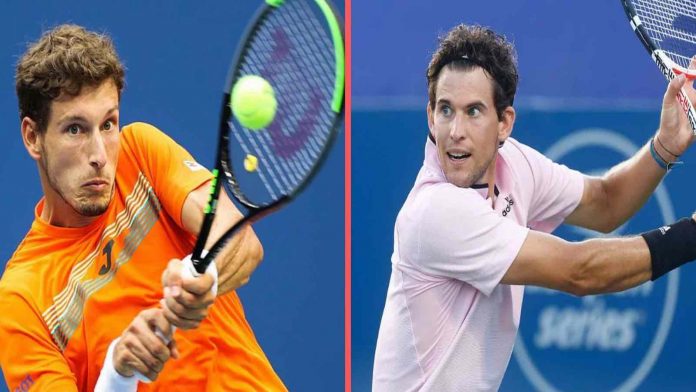 Two-time US Open semifinalist Pablo Carreno Busta will battle it out against 2020 US Open champion Dominic Thiem in the first round of the US Open on Monday.

The Spaniard began by leading his native nation to the ATP Cup finals, where they fell to Canada. He advanced to the fourth round of the Australian Open before being defeated by Matteo Berrettini. He had a notable performance at the Barcelona Open, when he was defeated by fellow countryman Carlos Alcaraz. The 31-year-old reached the Swedish Open semifinals and the Halle Open quarterfinals. At the Canadian Masters, Carreno Busta won the biggest championship of his professional career. Hubert Hurkacz was no match for him in the decisive battle. The Spaniard will be competing at Flushing Meadows after losing to Miomir Kecmanovic in the Cincinnati Masters’ opening round. So far, he has had 28 victories and 18 defeats.

The former World No. 3 has struggled with injuries and other health issues this year, which has prevented him from regaining his once-threatening form. The Austrian didn’t get his first victory in 14 months until a Challenger competition in Salzburg. Then, in the Swedish Open, the Austrian Open, where he reached the quarterfinals, and the Swiss Open, where he made it to the semifinals, Thiem amassed some desirable results. The 28-year-most old’s recent outing came at the Winston-Salem Open, where he picked up two unusual victories before ultimately losing to Jack Draper in the third round. At the tour level, he has nine victories and ten defeats so far this year.

The former US Open champion is renowned for his long backhand winners. Recently, he has rediscovered the confidence to score winners across the court with his backhand as well. Since suffering a setback from his wrist injury, his forehand has been erratic, albeit becoming a touch more dependable in recent months. Due to his prolonged time away from the courts, Thiem’s mental endurance is compromised, and he will find it difficult to play the best-of-five-sets contest. Against the former champion, Carreno Busta should be able to claim his first victory.