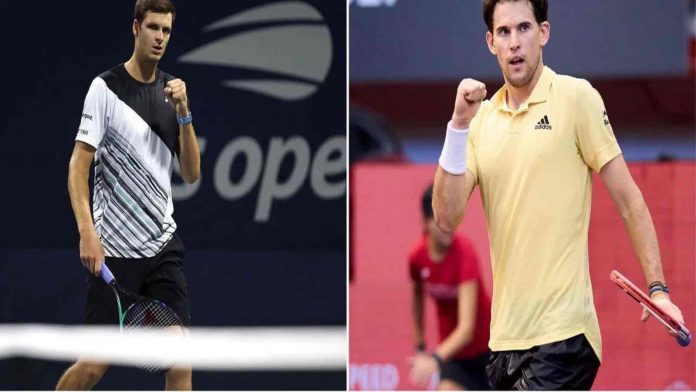 On Friday, the top seed Hubert Hurkacz will square off against Dominic Thiem, the winner of the 2020 US Open.

Hurkacz faced Jack Draper in the second round after receiving a bye in the first round. In the opening set, which was decided by a tie-break won by the Pole, neither player was able to break serve. After taking an early break in the second set, Hurkacz surged out to a 3-1 lead, but Draper fought back to tie the match later on. A tie-break was also scheduled for the set, but the young British player won it this time to tie the match. Most of the third set had one-way traffic. Hurkacz won the contest 7-6(5), 6-7(5), 6-1 with just one point lost throughout the entire set.

Dominic Thiem easily defeated Michael Geerts 6-4, 6-0 to earn a second-round matchup with Francisco Cerundolo, the sixth seed. He got off to a strong start, quickly jumping out to a 3-0 lead. The Austrian then took the next three games to take the opening set. After a lacklustre opening to the match, Cerundolo improved in the second set. When he was leading 5-1, he twice broke Thiem’s serve and easily served out the set to force a deciding. The former US Open winner broke his opponent’s serve once more to win 6-1, 1-6, 7-5 and go to his seventh quarterfinal of the year as the Argentine served to stay in the match at 6-5.

Head-to-head, Hurkacz has a 3-0 advantage over Thiem. At the 2022 Moselle Open, he defeated them in straight sets.

However, Thiem still lacks the confidence to control the action with his forehand. Unlike before, the shot does not put his opponent on the defensive. In fact, there are situations when it has the opposite impact and puts him under strain. Hurkacz doesn’t experience these issues, which makes life much easier for him. The top seed should continue to proceed.