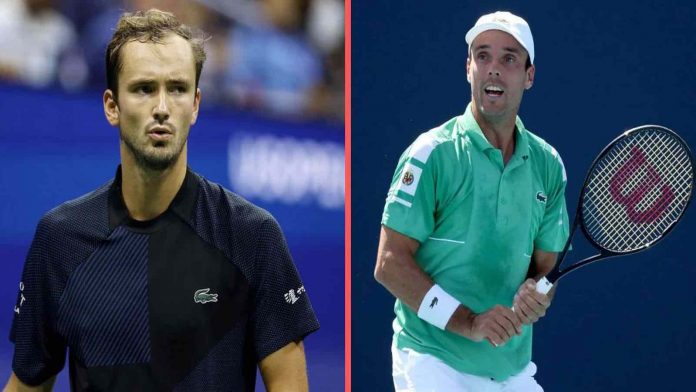 Albert Ramos-Vinolas was defeated by Medvedev in a commanding 6-3, 6-1 victory to kick off the ATP 500 competition. In the second round, he played Emil Ruusuvuori and defeated the Finn right away. He broke again to take the opening set 6-3. In the first three games of the second set, both players traded breaks, but Medvedev then dominated to take it 6-2 and advance to the quarterfinals.

In the first round of the Astana Open, Bautista Agut faced Felix Auger-Aliassime and won the first set 6-4. In the second set, the Canadian had a 3-1 lead, but the Spaniard quickly broke back and tied the match. The set went to a tie-break because there were no further service breaks. In the second round, Bautista Agut faced Pavel Kotov, who he defeated 8-6 to advance. He defeated the young Russian 6-1, 7-6(5) to go to the Astana Open quarterfinals.

Bautista Agut has a 4-1 advantage over Medvedev in their head-to-head matchup. The Russian defeated the Spaniard 6-3, 6-2 in the Mallorca Championships, and the two have already faced off twice this season. The Russian won 6-2, 6-4 at the Halle Open.

At the Astana Open, Bautista Agut has served superbly so far, winning 75.6% of his first-serve points (59 out of 78) and 66% of his second-serve points (35 out of 53). To defeat the Russian, he must maintain those numbers. Although Medvedev is behind his Spanish opponent in the head-to-head match, he is more talented and should be able to overtake him on Friday.

Prediction: Medvedev to win in 3