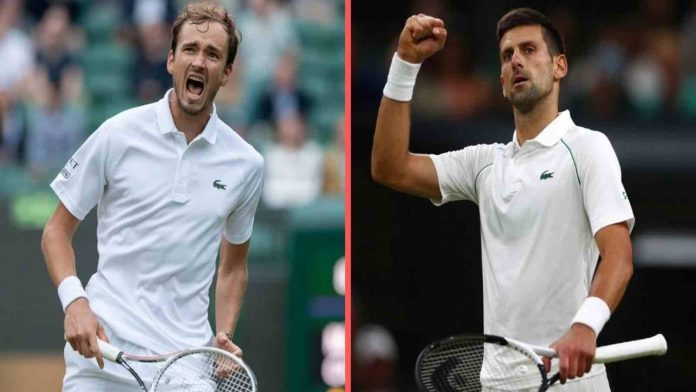 In a matchup of former World No. 1s, Novak Djokovic and Daniil Medvedev will compete in the Astana Open semifinals on Saturday.

The World No. 7 has maintained his impressive form, as he enters Astana having just won the Tel Aviv championship. Djokovic defeated Chilean Cristian Garin in the first round with a score of 6-1, 6-1. In the second round, the 35-year-old met Dutchman Botic van de Zandschulp and defeated him 6-3, 6-1. Djokovic advanced to the semifinals without dropping a set by defeating Russian Karen Khachanov 6-4, 6-3 in the quarterfinals.

In the same way, Medvedev has not yet released a set in the Kazakh capital. The Russian put on a string of faultless performances following a shocking loss to Stan Wawrinka in his opening match at the Moselle Open. He defeated Albert Ramos Vinolas 6-3, 6-1 in the first round, Emil Ruusuvuori 6-3, 6-2 in the second round, and most recently Roberto Bautista Agut 6-1, 6-1 in the quarterfinals of the Astana Open. The 26-year-old now has 40 wins this season versus 14 losses after the triumph.

Djokovic and Medvedev have previously faced off ten times, with the Serb holding a 6-4 advantage. In the 2021 Rolex Paris Masters, where they last met, Djokovic exacted revenge for losing the US Open final that year.

There isn’t a definite favourite in this matchup. However, the seven-match winning streak of the 21-time Major champion may give him more confidence to finish the race and go to his second consecutive final.

Prediction: Djokovic to win in 3