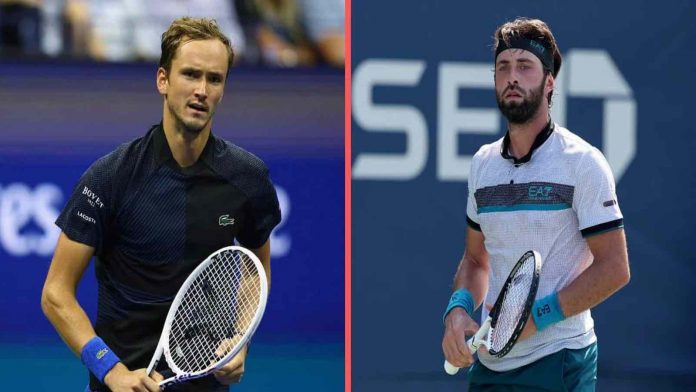 Daniil Medvedev, the top seed, will face Nikoloz Basilashvili, the World No. 93, in the Vienna Open’s first round on Tuesday.

By reaching the Australian Open finals for the second year in a row, Medvedev had a solid start to the year. In a match that lasted five hours and twenty-four minutes, he was defeated by Rafael Nadal. At the Mexican Open, the Russian eventually succeeded in unseating Novak Djokovic as the current World No. 1. The 26-year-old did compete in the French Open, when in the fourth round he was defeated by Marin Cilic. The Los Cabos Open championship was won by the 2021 US Open champion to kick off the summer hardcourt season. He was unable to defend his US Open crown, though. He recovered by progressing to the Astana Open semifinals, when he was forced to leave a match midway through due to injury.

On the other side, Basilashvili was defeated by Andy Murray in Australia’s opening round. He abruptly left the Dubai Championships, Indian Wells Masters, and Miami Open. At the Italian Open and the Madrid Open, he was defeated in his opening-round encounters. He was unable to advance past the second round in the French Open. He began his grasscourt season in the Stuttgart Boss Open, where he was defeated by Nick Kyrgios in the second round. The Wimbledon Championships then saw him lose in the first round. He lost in the first round at the US Open and the Cincinnati Masters during the summer hardcourt season. Following that, he participated in the Sofia Open and Moselle Open, where he was eliminated in the first and second rounds.

The Russian’s propensity for switching up his methods frequently presents difficulties for his adversaries. He is skilled at launching attacks from every imaginable spot on the court, giving him an immediate advantage in his matches. On the other hand, Basilashvili makes an effort to strike the ball as cleanly as possible. He enjoys playing the perfect game and stringing together powerful sequences of shots. He also has a talent for chasing down every ball, which could be advantageous for him in this game. Despite his injury issues, Medvedev ought to be the favourite to win Vienna and move on to the next round.