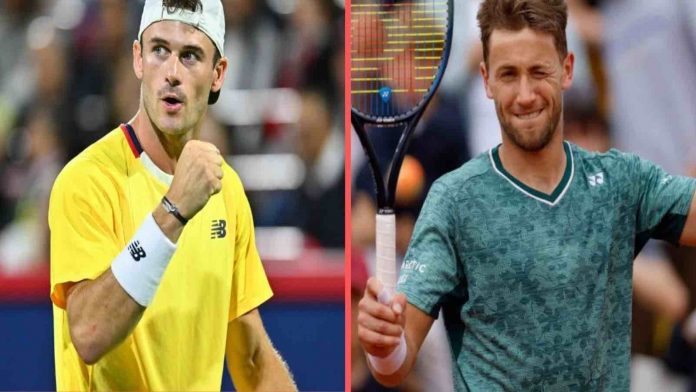 5th seed Casper Ruud will square off against home-hope Tommy Paul in the third round of the US Open on Friday.

After giving up a close first set, Casper Ruud battled past Tim van Rijthoven of the Netherlands in four sets, 6-7 (4), 6-4, 6-4, 6-4, to advance to the third round. In the opening round, Kyle Edmund was defeated by Ruud in three straight sets (6-3, 7-5, 6-2). With 40 victories and only 15 losses this season, the Norwegian is having an exceptional campaign. He rightly rose to No. 5 in the world this year, a career-high position. At the French Open, the 23-year-old reached his first Grand Slam final but lost to Rafael Nadal in the decisive game. This season, Ruud has won three championships, bringing his total for his career to nine. In addition to winning the Argentina Open, he successfully defended his titles at the Geneva Open and Swiss Open.

Meanwhile, Tommy Paul recently attained his highest World No. 31 rating. Paul, who is presently rated No. 34, has done reasonably well this year. He has a record of 31 victories and 21 defeats. The American advanced far enough in numerous competitions to reach the crucial stages. In the second round of the US Open, he defeated fellow countryman Sebastian Korda, winning 6-0, 3-6, 4-6, 6-3, 6-4. Paul defeated Bernabe Zapata Miralles in the first round with a score of 4-6, 6-3, 2-6, 6-0, 7-5. Paul also needed the deciding set to win.

Paul and Ruud have clashed thrice before, with their head-to-head record standing at 2-1 in favor of the Norwegian.

Paul has been defeated by Ruud twice in Grand Slam matches, therefore he will be aware of his strategy and set his strokes correctly to defeat him. The World No. 7 should be able to reach the fourth round with some effort.